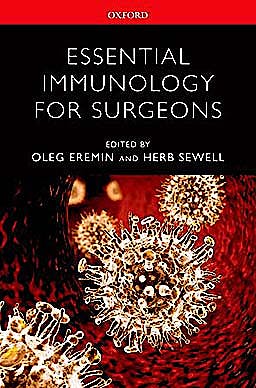 There has been a huge increase in the knowledge and understanding of the immunological processes involved in surgical practice in recent years. Anaesthesiologists and intensive care physicians are increasingly recognising the significant derangements of immune function in the critically ill patient and the possible therapeutic approaches to manage such patients (including new approaches in transplantation rejections, novel vaccination strategies in cancer treatment, as well as a better understanding of the beneficial effects of standard chemotherapy).

Written by recognised experts in their field from both the UK and the US, and extensively referenced for further reading, Essential Immunology for Surgeons provides a concise, up-to-date, and readable account of immunology in general and its translation into key areas of clinical practice. It provides the necessary foundation for a critical understanding of this essential and rapidly expanding area of biological science that underpins and explains the modern concepts of a range of diseases and conditions, encompassing autoimmunity, infection, trauma, cancer, nutrition, organ transplantation, and various forms of therapy.

Previously published as Immunological Basis for Surgical Science and Practice, this fully-updated textbook is aimed predominantly at the surgical trainee, but will also be of value to undergraduate and postgraduate clinicians of any discipline who wish to have a better understanding and knowledge of the subject, as well as to researchers studying the various core topics discussed in the book.

Readership: Surgical trainees and consultants, undergraduate and postgraduate clinicians of any discipline wishing to have a better understanding and knowledge of the subject.

Professor Oleg Eremin graduated from the University of Melbourne, Australia, in 1964, before training in surgery at the Royal Melbourne Hospital and in Papua New Guinea. He moved to the UK in 1972, becoming Research Assistant at the University of Cambridge, between 1974 and 1980, undertaking research into tumour immunology and anti-cancer defences. In 1981 he became Senior Lecturer at the University of Edinburgh and Honorary Consultant Surgeon at the Edinburgh Royal Infirmary, and from 1985 to 1998 he was Regius Professor of Surgery at University of Aberdeen, and Honorary Consultant Surgeon at Aberdeen Royal Infirmary, before taking up his current posts. Professor Eremin has over 200 publications in peer-reviewed journals, 25 chapters in books, and is the editor of four textbooks. His recent research interests include tumour cell resistance and proteomics, and immunotherapy in advanced cancer with dendritic cells and hTERT.

Professor Herb Sewell studied at Birmingham University gaining BDS Hons1 in 1973. Following further studies and research in immunology, he gained an MSc in 1975 and PhD in 1978. He subsequently pursued professional training and accreditation in clinical immunology and qualified in Medicine (MB ChB in 1983). He was appointed Senior Lecturer/Honorary Consultant in Immunology at the University of Aberdeen 1985 and subsequently moved to the University of Nottingham as Professor and Honorary Consultant in Immunology in 1990. In 2002 he was appointed a Pro Vice Chancellor/Vice President of Research at the University of Nottingham (2002-2007). His research interests focus primarily on the immunology of allergic disease and in particular on immunomodulation of the allergic response by the biological properties of allergens and by molecularly engineered antibodies. He has published over 120 peer reviewed original papers and reviews.