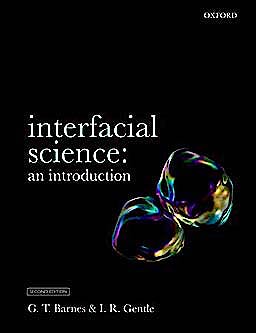 biología médicabiomedicinabioquímica
ABOUT THIS BOOK

Interfacial science impacts on our lives in diverse and surprising ways. Without it, we would face bubble bath without the bubbles, detergents which don't clean, cappuccinos without the froth. It has also fuelled some of the most ground-breaking and thought-provoking advances in research in recent times, from biosciences to nanotechnology. Introduction to Interfacial Science offers an engaging insight into the study of the physical and chemical properties of interfaces, how they behave, why they behave as they do, and how this behaviour can be harnessed and exploited in novel and exciting ways.

Interfacial Science: An Introduction is an accessible text introducing readers to the chemistry of interfaces, a subject of increasing relevance and popularity due to the emergence of nanoscience.

Opening with an overview of the key principles of capilliarity and adsorption, the book goes on to explore liquid/gas, solid/gas, and liquid/liquid interfaces, before examining biological interfaces, one of the most stimulating areas of current research. With the careful explanation of essential mathematical and physical concepts, and description of real world applications of the material presented, the book helps the student to build confidence in, and see the relevance of, the topics covered.

Striking a careful balance between the highly mathematical treatments of the subject by more specialist texts, and the rudimentary treatment offered by general physical chemistry texts, Interfacial Science: An Introduction offers a breadth and depth of treatment which is perfect for any advanced undergraduate course on this exciting, dynamic subject.

Online Resource Centre
The Online Resource Centre to accompany Interfacial Science: An Introduction features the following resources for registered adopters of the text:
- Downloadable figures
- Solutions manual, containing worked solutions to the exercises appearing in the textbook
- Protocols for around five laboratory experiments, appearing as MS Word documents, for lecturers to modify to suit their own particular setups

After completing a Ph.D. at the University of New South Wales, Dr Geoff Barnes spent two years at Columbia University in New York and then two more years at the Swiss Federal Institute of Technology (ETH) in Zürich. He returned to Australia in 1962 to take up a position as Lecturer in Physical Chemistry at The University of Queensland and retired as Reader in 1994. For most of this period he worked in Surface Chemistry with a special interest in insoluble monolayers. Since retirement he has worked with Ian Gentle on various research projects and more recently in the writing of Interfacial Science: An Introduction.

"The book is particularly remarkable in the simplicity of demonstrating basic thermodynamic notions and also on the thorough descriptions it gives of up-to-date physical characterization techniques. I strongly recommend this book, not only to undergraduate students... but also to a wider audience, particularly PhD students who would benefit from a brief but complete overview on the physical chemistry of surfaces and interfaces. It is perfectly suited to professors who would like to introduce basic interface notions to students in science. - Dr Francois Ganachaud, ENSCM, Montpellier - ChemPhysChem 2006, 7, 965-967, Wiley-VCH Verlag GmbH & Co.

"This is a very well written account of the main aspects of interfacial science. It is suitable for intermediate and senior undergraduates and fills a gap in the currently available text books." - Jack Yarwood, Royal Society of Chemistry 2006