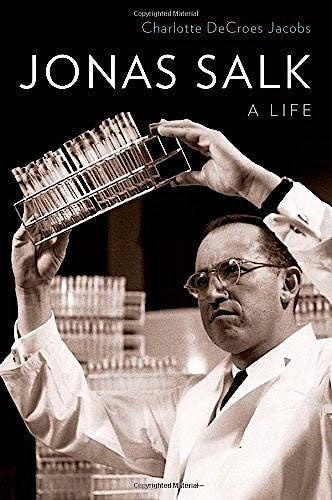 When a waiting world learned on April 12, 1955, that Jonas Salk had created a vaccine that could prevent poliomyelitis, he became a hero overnight. Jubilation erupted worldwide, with Salk as the focus. Born in a New York tenement, humble in manner, Salk had all the makings of a twentieth-century icon—a white knight in a white coat. In the wake of his achievement, he received a staggering number of awards, a Congressional Gold Medal, a Presidential Citation; for years his name ranked with Gandhi and Churchill on lists of the most revered people. And yet the one group whose adulation he craved—the scientific community—remained ominously silent. "The worst tragedy that could have befallen me was my success," Salk later said. "I knew right away that I was through—cast out."

In the first complete biography of Jonas Salk, Charlotte DeCroes Jacobs unravels his complexities and nuances to reveal an unconventional scientist and a misunderstood and vulnerable man. Despite his incredible success, all but eradicating a crippling disease from the world, Salk was ostracized by the scientific community. Its esteemed members accused him of two transgressions: failing to give proper credit to other researchers, and crossing the imaginary line of academic decorum by soliciting media attention. Even before his success catapulted him into the limelight, Salk was an enigmatic man disliked by many of his peers. Driven by an intense desire to aid mankind, Jacobs writes, he was initially oblivious and eventually resigned to the personal cost—as well as the costs suffered by his family and friends. And yet Salk remained, in the eyes of the public, an adored hero.

Was Jonas Salk an American saint or a self-absorbed man who connived to assure himself a place in medical history? Granted unprecedented access to Salk's sealed archives and having conducted hundreds of personal interviews, Jacobs offers a more complete picture of the complicated figure than has previously existed. Salk's full story has not yet been recounted, Jacobs shows. His historical role in preventing polio has overshadowed his part in co-developing the first influenza vaccine—for which he never fully got credit; his effort to meld the sciences and humanities in the magnificent Salk Institute; and his pioneering work on AIDS, all carried out amidst scientific back-room politics with the health of the public at stake. Jacobs crafts a vivid and intimate portrait of this almost impenetrable man, showing him to be at once far more complex and layered than the public image of America's hero and far more sensitive and caring than the stubborn, standoffish, glory-seeking scoundrel suggested by some scientists.

Charlotte D. Jacobs, M.D. is the Ben and A. Jess Shenson Professor of Medicine (Emerita) at Stanford University. She has served as Senior Associate Dean and as Director of the Clinical Cancer Center, and is the author of Henry Kaplan and the Story of Hodgkin's Disease.