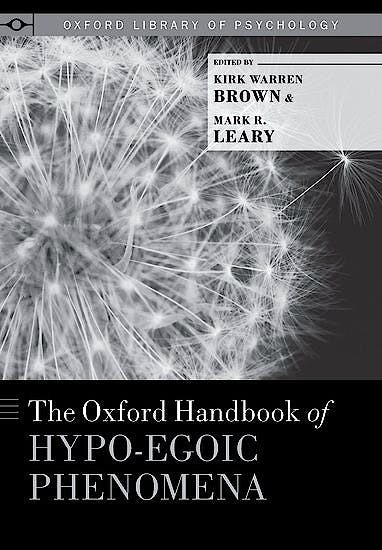 The Oxford Handbook of Hypo-Egoic Phenomena (Oxford Library of Psychology)

Egoicism, a mindset that places primary focus upon oneself, appears to be rampant in contemporary Western cultures as commercial advertisements, popular books, song lyrics, and mobile software applications consistently promote self-interest. Although a focus on oneself has adaptive value for physical preservation, decision making, and planning, researchers have begun to address the psychological, interpersonal, and broader societal costs of excessive egoicism. In an increasingly crowded and interdependent world, there is a pressing need for investigation of alternatives to a "me and mine first" mindset.

For centuries, scholars, spiritual leaders, and social activists have advocated a "hypo-egoic" way of being that is characterized by less self-concern in favor of a more inclusive, "we first" mode of functioning. In recent years, investigations of hypo-egoic functioning have been taken up by philosophers, cognitive scientists, neuroscientists, and psychologists. Edited by Kirk Warren Brown and Mark Leary, The Oxford Handbook of Hypo-egoic Phenomena brings together these vital lines of inquiry, distilling current knowledge about hypo-egoicism into a single source book.

The authors of each chapter have conducted high-quality research and written authoritatively about topics that involve hypo-egoicism, all together providing an authoritative account of theory, research, and applications of hypo-egoic functioning. Part I of the book offers theoretical perspectives from philosophy and several major branches of psychology to inform our understanding of the nature of hypo-egoicism and its expressions in various domains of life. Part II presents psychological research findings regarding particular psychological phenomena in which hypo-egoicism is a prominent feature, demonstrating the implications of hypo-egoicism for well-being, emotion regulation, adaptive decision-making, positive social relations, and other markers of human well-being. Each chapter reviews the research literature regarding a particular hypo-egoic phenomenon and offers constructive criticism of the current limits of the research and important agendas for future investigation. Thus, this Handbook offers the most comprehensive and thoughtful analyses of hypo-egoicism to date.

Kirk Warren Brown is an Associate Professor of Social Psychology and Health at Virginia Commonwealth University. His research centers on the role of attention to and awareness of internal states and behavior in healthy human functioning. He has a particular interest in the nature of mindfulness and the role of mindfulness and mindfulness-based interventions in emotion regulation, behavior regulation, and mental health in both normative and clinical populations. He has authored numerous journal articles on these topics and is senior editor (with JD Creswell and RM Ryan) of the Handbook of Mindfulness: Theory, Research, and Practice (Guilford Press). Dr. Brown is an elected Fellow of the Association for Psychological Science.

Mark Leary is a Professor of Psychology and Neuroscience, and is the Director of the Duke Interdisciplinary Initiative in Social Psychology at Duke University. His research and writing has centered on social motivation and emotion, with an emphasis on people's concerns with interpersonal evaluation and the negative effects of excessive self-focused thought. He has published 12 books and more than 200 scholarly articles and chapters on topics such as self-presentation, self-relevant thought, social emotions, interpersonal rejection, and self-esteem. His books include: Social Anxiety, Interpersonal Rejection, The Social Psychology of Emotional and Behavioral Problems, Self-Presentation, the Handbook of Self and Identity, and The Curse of the Self.