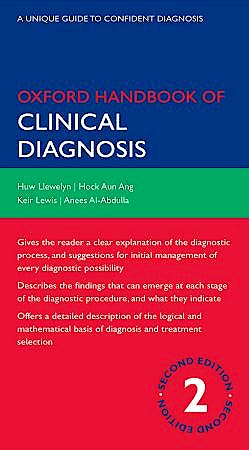 The Oxford Handbook of Clinical Diagnosis is the first and only book so far to describe the differential diagnostic thought process so that it can be learnt logically and systematically. It also shows how to justify subjective diagnostic impressions clearly and logically in an evidence-based way. It provides the differential diagnosis of each symptom, physical sign and initial test result. The book uses pattern recognition tables which enable the reader to scan the page to see which diagnostic application would apply best to a patients findingsor case history. The book is aimed at medical students and others who wish to improve their diagnostic skills. It describes how to justify diagnoses and management decisions verbally or in writing and clarifies what evidence is needed to do so from research, and its statistical features. It provides senior doctors with a framework and examples to help teach trainees and students to approach diagnostic problems in a logical way and to justify their opinions. It provides all doctors with practical help when dealing with problems outside their immediate field of expertise, especially general practitioners and those faced with unforeseen situations.

Huw Llewelyn qualified in Medicine at the University of Wales in 1970. In 1975 he became senior registrar and lecturer in medicine and endocrinology at St Bartholomew's Hospital London. In 1979 he was appointed Consultant Physician at King's College Hospital London. His MD was sponsored by the Nobel Laureate Sir James Black FRS and describes new theorems in probability theory that allow tests to be designed and assessed in a systematic way for differential diagnosis and identify patients who probably respond (or do not respond) to specific treatments. His clinical and teaching experience is based on work in university teaching hospitals in inner cities, rural district general hospitals and general practice. He is currently adapting the Oxford Handbook of Clinical Diagnosis so that it can be used by trainee doctors at Kettering General Hospital to write sophisticated electronic discharge and handover summaries that explain medical reasoning to patients and students.

Hock Aun Ang is a medical graduate from University College Cork, Ireland. After jobs in various medical specialties in the UK, he pursued Diploma in Tropical Medicine and Hygiene (Liverpool) and MSc in Infectious Diseases (University of London). Currently, as a Consultant Physician and Endocrinologist at Seberang Jaya Hospital in Penang, Malaysia, he is actively involved in the supervision of clinical specialists, medical officers and house officers, and the teaching of medical students from Penang Medical College.

Keir Lewis qualified from Guy's and St Thomas' Hospitals and after various jobs in North and East London, he completed his specialist training in Respiratory and General Internal Medicine in Wales. He has a First Class Intercalated BSc in Psychology and his current research interests include Sleep-Disordered Breathing (in which he did his MD Thesis) and Smoking Cessation.

Annes Al-Abdulla graduated from Baghdad University Medical School in 1977. He came to the UK in 1983 and started training in Chemical Pathology in 1985 first at Kings College London then at the Middlesex and University College, London Medical Schools His last post was a lecturer and senior registrar in chemical pathology. During this period he obtained two master degrees from London University in General and Clinical Biochemistry and finished the examinations for the membership of the Royal College of Pathology, which was awarded in 1990. After this he decided to move into general practice and after a couple of years he was able to get a job as a full time general practitioner in Carmarthenshire. In 2000 he was awarded the fellowship of the Royal College of Pathology. Currently in addition to his job as a GP, he regularly covers for the absence of the local Chemical Pathologist and participitates in two hospital diabetic clinics as a diabetes specialist.

"It is pitched perfectly for the student studying for undergraduate clinical exams and for the general practice specialist training knowledge test. It would also serve as a helpful aide memoir for doctors dealing with a patient presenting with a problem outside their speciality." - British Journal of Hospital Medicine

"The idea is brilliant -- take symptoms, signs, and examination findings, and suggest the most likely diagnosis. Then discuss how best to confirm it...once again OUP have come up trumps with another fine addition to the handbook family." - Dr Jeremy Sagar, Univadis