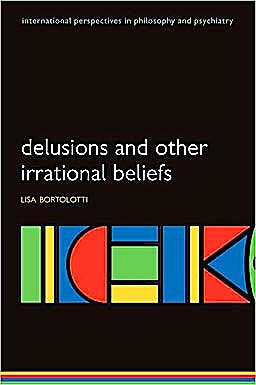 Delusions and Other Irrational Beliefs (International Perspectives in Philosophy & Psychiatry)

Delusions are a common symptom of schizophrenia, dementia and other psychiatric disorders. Though delusion is commonly defined as a false and irrational belief, there is currently a lively debate about whether delusions are really beliefs and indeed, whether they are even irrational.

The book is an interdisciplinary exploration of the nature of delusions. It brings together the psychological literature on the aetiology and the behavioural manifestations of delusions, and the philosophical literature on belief ascription and rationality. The thesis of the book is that delusions are continuous with ordinary beliefs, a thesis that could have not only significant theoretical implications for debates in the philosophy of mind and psychology, but also practical implications for psychiatric classification and the clinical treatment of subjects with delusions.

Based on recent work in philosophy of mind, cognitive psychology and psychiatry, the book offers a comprehensive review of the philosophical issues raised by the psychology of normal and abnormal cognition, defends the doxastic conception of delusions, and develops a theory about the role of judgements of rationality and self-knowledge in belief ascription.

"Much interesting recent material about delusions has come to us - from philosophers of mind and psychology, from experimental and cognitive psychologists, and from many whose work straddles, and blurs, such disciplinary boundaries. Lisa Bortolotti's book Delusions and Other Irrational Beliefs (OUP 2010) stands out among this material for its clarity, acumen, freshness, and sweep. It is well written and organized, carefully argued, independent and original in its perspective, and fair-minded in its appraisals. It redirects theoretical attention from one, widely accepted paradigm (delusions as irrational beliefs), to another (delusions as disturbances of self knowledge and cognitive authority). And finally, it has the merit of providing lengthy clinical case material sufficient to illustrate the theoretical points made." - Jennifer Radden, Metapsychology Online