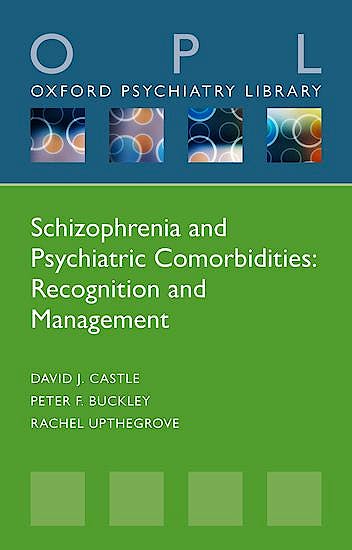 Psychiatric comorbidities such as depression, anxiety and substance use are extremely common amongst people with schizophrenia. They add to poor clinical outcomes and disability, yet are often not at the forefront of the minds of clinicians, who tend to concentrate on assessing and treating the core symptoms of schizophrenia, notably delusions and hallucinations. There is an imperative to assess every patient with schizophrenia for psychiatric comorbidities, as they might masquerade as core psychotic symptoms and also because they warrant treatment in their own right. This volume addresses these issues using a clinical lens informed by the current literature. Published as part of the Oxford Psychiatry Library series, the book serves as a concise and practical reference for busy clinicians.

David J. Castle is Professor of Psychiatry at St Vincent's Health and The University of Melbourne. He has wide clinical and research interests, encompassing schizophrenia and related disorders, bipolar disorder, OCD spectrum disorders and disorders of body image. He has a longstanding interest in the impact of licit and illicit substances on the brain and body, and is actively engaged in programmes addressing the physical health of the mentally ill and the mental health of the physically ill. He has published widely in the scientific literature and is a frequent speaker at scientific meetings. His broader interests include music, literature, theatre and art.

Peter F. Buckley is Medical School Dean and Psychiatrist at US Academic Center and has had a longstanding focus on schizophrenia. He has been involved for three decades in many aspects of schizophrenia research, from genetics studies to treatment studies making him an expert in schizophrenia illness.

Rachel Upthegrove is Professor of Psychiatry and Youth Mental Health at the University of Birmingham, and Consultant Psychiatrist in the Birmingham Early Intervention Services. Clinically Rachel has worked for over 20 years in psychiatry, primarily within the field of Early Intervention and Youth Mental Health. Her research interest is within the field of major mental illness; particularly schizophrenia and co-morbid depression in early phases of illness. Recent projects have developed the investigation of inflammatory models of psychosis, novel treatments for depression in early psychosis and machine learning in prognostic indicators in early phases of developing mental ill health.