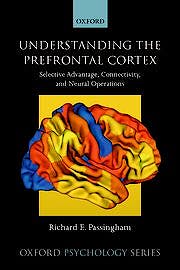 A successor to the acclaimed 'Neurobiology of the Prefrontal Cortex', 'Understanding the Prefrontal Cortex' presents a careful study of the anatomical connections in this brain region, showing how each area and subarea of the brain has a unique pattern of connections, and exploring the transformation that this area performs - from its inputs to it outputs.

The book ends with a final section in which these principles are applied to the human brain. It starts by discussing the expansion of the prefrontal cortex during human evolution. It then considers how the human brain has co-opted mechanisms that existed in our primate ancestors, and by providing new inputs had extended them so as to support reasoning, remembering events from the distant past and imagining events in the distant future, the sense of self, language, the ability to understand the mental states of others, and the ability to cooperate and learn social and moral rules.

Written by a leading brain scientist, the book will be an important and influential contribution to the neuroscience literature.

If you want to understand the frontal lobes of the brain then there is no better guide than this. It covers both the very latest research and the seminal studies that have shaped the field. Not only does it integrate what we know about the patterns of activity that play across prefrontal neurons with neuroimaging research but it is informed by a deep understanding of anatomy and evolution. There is nothing else quite like it. - Matthew Rushworth FRS, Watts Professor, Department of Psychology and Wellcome Centre for Integrative Neuroscience (WIN), University of Oxford

A wonderful, authoritative, book on the most human region of the brain. All told from the perspective of its “geography”. It is a major update and will be a rich resource for years to come.' - Earl Miller, Picower Professor of Neuroscience, MIT