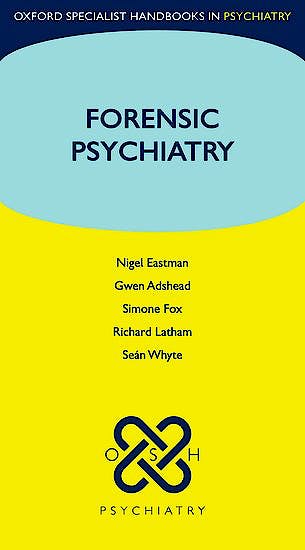 Forensic Psychiatry is the first book to cover the clinical, legal and ethical issues for the treatment of mentally disordered offenders for all of the United Kingdom and Republic of Ireland jurisdictions. Written by an expert interdisciplinary team from the fields of both law and psychiatry, including the eminent Nigel Eastman who has engaged with many high-profile legal cases, this is a comprehensive and up-to-date guide which includes clinical observations, guidance and ethical advice across the psychiatric discipline.

Uniquely focusing on the interface between psychiatry and law and including suggestions, using case examples, on how to navigate this interface successfully, this book contains clear guidance on all aspects of forensic psychiatry, for both mental health and legal professionals. It also contains extensive cross-referencing which allows the reader to access all the relevant clinical, legal and ethical information quickly and effectively.

Alongside the practical advice on managing clinical and legal situations, there are also case examples, summaries of relevant legislation and introductions to different ethical approaches and clinical observations, derived from the experience of the authors. Also included are brief summaries of important legal cases and inquiries relevant to the subject.

Nigel Eastman is Professor of Law and Ethics in Psychiatry at St George's, University of London and an Honorary Consultant Forensic Psychiatrist in the NHS, assessing and treating patients in medium security. Dually qualified as a doctor and barrister, he has researched and published widely on law and ethics relating to mental disorder and mental healthcare, as well as on policy and services for mentally disordered offenders. He is an advisor to the Law Commission, lectures for the Judicial Studies Board for England and Wales, as well as to judges in other jurisdictions, and has given evidence to Parliamentary Select Committees on law and psychiatry.

Gwen Adshead is a forensic psychiatrist and psychotherapist. She trained at Barts and then at St George's Hospital. After four years as a lecturer at the Institute of Psychiatry, she trained as a psychotherapist, with particular interest in attachment theory and groupwork in forensic settings. She qualified as a member of the Institute of Group Analysis in 2000. She has worked at Broadmoor Hospital since 1998 as a consultant. Since qualifying in clinical psychology in 2001 Simone Fox worked for three years with adult mentally disordered offenders in a Regional Secure Unit in West London. She currently works in both clinical and academic settings. In her clinical role she is responsible for supervising the Multisystemic Therapy (MST) Pilot Project in Merton and Kingston. Her academic role is as a lecturer/clinical tutor on the Royal Holloway, University of London, Clinical Psychology training course.

Seán Whyte is a Consultant Forensic Psychiatrist with CCTs in both general adult and forensic psychiatry. He has worked in a variety of hospital, community and secure institutional settings in both specialties and now leads the Community Forensic Team for South-West London, in addition to teaching and court work.