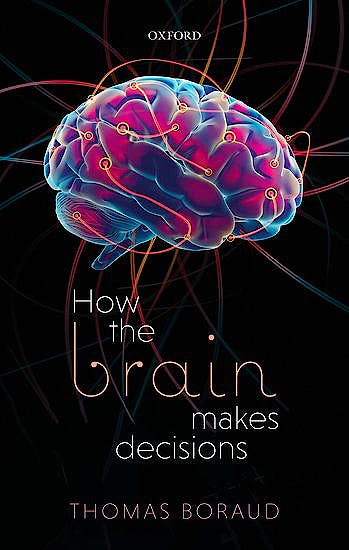 How the Brain Makes Decisions

Introduction
Intoduction to the English edition
1: Twenty-five centuries of debate: a short history of decision making
2: A Ghost in the Machine: Neurobiology of decision making
The Neurobiology of Decision Making
3:Introduction to information transfer in the nervous system
4:The winner takes all: How decisions emerge
5:The lamphrey's dilemma
6:Learn to earn
7: From pallium to cortex: the coup of the telencephalon
8:The Eminence Grise
9:A Hierarchy of Decision
10:Noise and rationality
Is Rationality rational
11:Reason under scrutiny
12:Mental representation
13:Mirror, mirror!
14:Anticipation and utility
15:The grandmaster and the playmates
16:Machine Learning Approach of Reinforcement Learning
17:The decision engine
Rationality, the final frontier
18:Bias and heuristics
19:Pathologies of decision making
20:Free-will
21:Open questions
22:Conclusions
Acknowledgements
Appendices

What if our ability to make decisions was more a matter of chance than a rational process? It has long been recognized that the mind decides, the body obeys. However, as the author of this book argues, in reality it might just be the opposite. The decision-making process is produced by cerebral matter. It is a random phenomenon that results from competing processes within a network whose architecture has changed little since the first vertebrates.

This book presents a 'bottom-up' approach to understanding decision making, starting from the fundamental question: what are the basic properties that a neural network of decision making needs to possess? Combining data drawn from phylogeny and physiology, the book provides a general framework for the neurobiology of decision-making in vertebrates, and explains how it evolved from the lamprey to the apes. It also looks at the consequences of such a framework: how it impacts our capacity for reasoning, and considers some aspects of the pathophysiology of higher brain functions. It ends with an open discussion of more philosophical concepts such as the nature of Free-will.

Written in a lively and accessible style, the book presents an exciting perspective on understanding decision making.

Thomas Boraud, Senior Researcher, IMN, CNRS-Université de Bordeaux. After a Marie Curie Fellowship at the Hebrew University of Jerusalem, Thomas Boraud secured a tenured research position in the CNRS in 2001. Since then, he hsa obtained financial support to control his own research projects and developed a research team made up of 7 senior researchers and an equivalent number of PhD and post-Doc Researchers. He was president of the Parkinson's committee of Fondation de France (2009-2012) and has been elected president of the IBAGs for 2017-2019. He is currently the Adjoint Director of the Institute of the Neurodegenerative Diseases in Bordeaux. He was awarded the Prix d'excellence Scientifique (2010) and Prix Innovation de la Fondation pour la Recherche Medicale (2010).