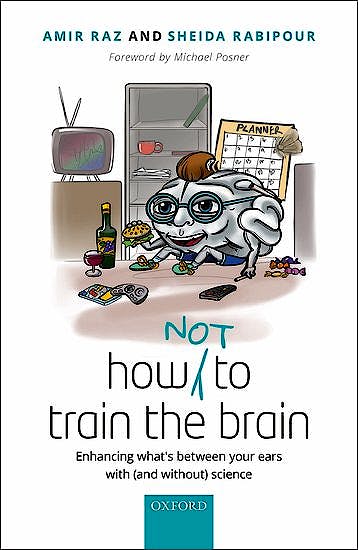 How (Not) to Train the Brain. Enhancing What's between Your Ears with (and Without) Science

List of Illustrations
PART I: Why Train Your Brain?
1: Introduction
2: Should We Brain-Train in School?
3: Are You Paying Attention?
PART II: When an Apple a Day Is Not Enough
4: Training the Aging Brain: Is Cognitive Decline Inevitable?
5: Rehabilitating and (Re-)Training the Injured Brain
6: Mental and Neurological Remediation
PART III: To Train or Not To Train?
7: From Theory to Practice: Contextualizing Brain Training
8: Conclusion: The Case for Brain Training
Table of Products

Brain training is all the rage. Commercial and clinical initiatives capitalize on trailblazing interdisciplinary research that spans domains such as education, psychological and brain science, cognitive remediation, and mental health. Promotional materials boast that we can learn to think and respond faster, focus better, and control our emotions; companies and authors market techniques to boost memory, increase confidence, and overcome cognitive impairments.

'How (not) to Train the Brain' examines the field of cognitive fitness and scrutinizes the scientific evidence in support of brain training techniques. With the potential to affect millions this topic is important for scientists, practitioners, educators, and the general public. While many a consumer often marvels at this highly commercialized field, discerning fact from fad becomes a challenge given the abundance of products, publications, and contexts. Moreover, available products prey on the naivety of individuals unfamiliar with the nuanced field of neuroscience, advertising programs that lack scientific validation or presenting unfounded arguments.

In this book, the authors review data from hundreds of articles and provide an overarching account of the field, separating scientific evidence from publicity myth and guiding readers through how they should - and should not - train the brain. They describe existing techniques, including those rooted in scientific research, and survey methods that purport to yield measurable improvements. Intended for a wide audience, this book taps a timely topic by highlighting the most salient approaches to boosting brain function while identifying those that don't seem to work.

Professor Raz earned his Ph.D. in Brain Science from the Interdisciplinary Center for Computational Neuroscience at the Hebrew University of Jerusalem under the supervision of the late Professor Shlomo Bentin. He then went on to a post-doctoral fellowship with Professor Michael Posner at the Weill Medical College of Cornell University, where he took on a faculty position thereafter. He then joined the faculty at Columbia University in the City of New York and later became the Canada Research Chair at McGill University in Montreal, Canada.

Sheida received her Bachelor and Master of Science degrees from McGill University, and her PhD in Psychology from the University of Ottawa, in Canada. Her research centres on cognitive enhancement interventions that may help understand and optimize brain function throughout life. Sheida is also passionate about science communication and community outreach. She frequently partakes in knowledge translation activities targeting broad audiences, and has founded initiatives to engage the public in learning about brain function and mental health. Sheida has published her research in academic journals and presented her work in national and international conferences. Her research and outreach activities have earned her numerous awards, honours, and scholarships from national and international organizations.