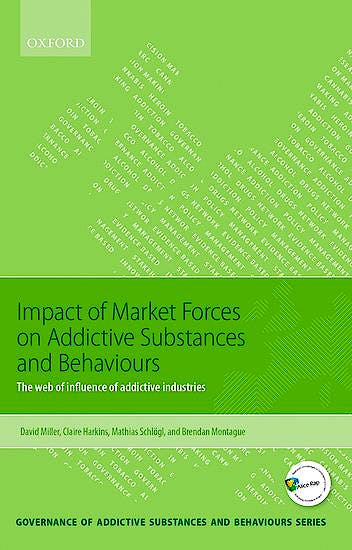 Impact of Market Forces on Addictive Substances and Behaviours. the Web of Influence of Addictive Industries

The differences between alcohol, food, gambling, and tobacco as consumer products are obvious. Yet research suggests that there are underlying similarities in the way that food, alcohol, and gambling industries are replicating the tobacco industry's strategy of attempting to influence and determine public health policy.

Impact of Market Forces on Addictive Substances and Behaviours examines the 'web of influence' formed by industries which manufacture and sell addictive products and trade associations and policy intermediaries such as lobbyists and think tanks in the EU. Using a new dataset on these corporate networks, it quantifies the strength of the connections between the actors in these webs, and uses this data to guide qualitative studies on the content of corporate strategy and, specifically, on corporations' attempts to 'capture' policy and three crucial ancillary domains: science, civil society, and the news and promotional media.

The study draws on the structural data to outline the comprehensive engagement of industry with policy issues at the EU and the ways in which corporations and stakeholders attempt to influence policy in their favour. It concludes by asking what kinds of solutionsmight be possible to the evident public health challenges posed by the addictions web of influence, and proposes key reforms that have the best chance of minimising the impact of disease stemming from addictions in European countries.

David Miller was appointed at the University of Bath in 2012 after a spell as Professor of Sociology at the University of Strathclyde in Glasgow (2004-2011). David is interested in understanding power: who has it, how it is exercised and how it can be democratised. He is mostly interested in studying the powerful and is interested in a wide range of methods for doing so, including via investigative research, which he pursues with a range of collaborators. He is a founder of Public Interest Investigations, a non profit companywhich is behind two projects: spinwatch.org and powerbase.info, on the latter of which he is editor.

Claire Harkins is currently Programme Leader of the MSc Contemporary Drug and Alcohol Studies at the University of the West of Scotland, where she has been a faculty member since 2014. After completing undergraduate and MRes at the University of Strathclyde, Claire was awarded PhD by the University of Bath in 2015. Claire's research interests include understanding corporate power and how it is exercised in relation to public health. Current work includes exploration and analysis of the organisational shape and activity of industrial actors in scientific, policy and public debates. Her articles have appeared in Critical Social Policy and the British Medical Journal. Claire lives in Glasgow with her son Liam.

Matthias Schlögl is Researcher, Austrian Centre for Digital Humanities, Austrian Academy of Sciences and PhD candidate at the University of Bath. Matthias is interested in computer aided methods such as Natural Language Processing (NLP), data scraping/miningand Social Network Analysis (SNA). He has used these methods and techniques in a variety of research projects. His research - including the PhD project - focuses on the nexus of science and politics on the one hand and science and business/civil society on theother. He has been involved in several international (including the FP7 project ALICE RAP) and national research projects at the University of Bath (UK), the University Aarhus (DK), the Social Science Research Center Berlin (GER) and the Austrian Centre for Digital Humanities (AT).

Brendan Montague is an investigative journalist with 20 years of experience working for national, regional and online news publications. Brendan is the founder and director of Request Initiative, a non-profit community interest company that makes freedom of information requests on behalf of charities and NGOs, including Greenpeace and Friends of the Earth. He also founded DeSmog UK, an investigative news site focussed on climate denial. Previously, he has worked with the Sunday Times and the Mail on Sunday, and published with Vice, The Guardian, Private Eye, the Mail and the New Statesman.