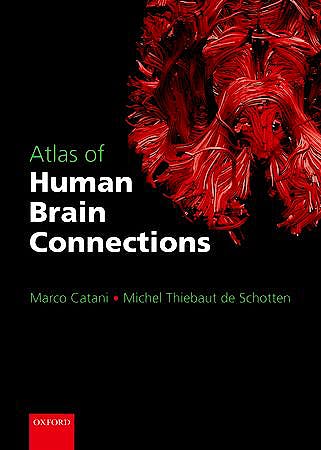 One of the major challenges of modern neuroscience is to define the complex pattern of neural connections that underlie cognition and behaviour. Brain connections have been investigated extensively in many animal species, including monkeys. Until recently, however, we have been unable to verify their existence in humans or identify possible tracts that are unique to the human brain.

The Atlas of Human Brain Connections capitalises on novel diffusion MRI tractography methods to provide a comprehensive overview of connections derived from virtual in vivo tractography dissections of the human brain. The book introduces the reader to the fundaments of human brain organization as derived from the study of the surface, sectional and connectional anatomy.

It starts with an historical overview of the giant steps taken in neuroanatomy, from its birth more than 2000 years ago, to contemporary neuroimaging insights. Next, detailed descriptions of the major white matter connections, their function, and associated clinical syndromes are dealt with in detail. The composite maps of the Atlas are an excellent anatomical resource for teaching, clinical, and research purposes. By reviewing the basic principles of neuroanatomy, its historical roots, and its modern achievements in the field of DTI tractography, the book fills the gap between the detailed connectional anatomy of the monkey brain and the 19th century descriptions of white matter tracts from post-mortem human dissections.

Covering a wide range of topics in the field of clinical neuroanatomy, this book constitutes both an excellent introduction to the brain, and a valuable reference work for experienced clinicians and researchers working in the field of neurology, psychiatry, neurosurgery, and neuroradiology.

Marco Catani is a Clinical Senior Lecturer in the Department of Forensic and Neurodevelopmental Science at the Institute of Psychiatry and Honorary Consultant Psychiatrist at the Maudsley Hospital. He is the Head of the Natbrainlab at King's College London, UK. Over the last ten years he has pioneered the use of novel imaging methods to re-explore the neuroanatomy of connections and describe new pathways of the human brain.

Michel Thiebaut de Schotten is a research fellow in the Department of Forensic and Neurodevelopmental Science at the Institute of Psychiatry. He is member of the Natbrainlab at King's College London, UK. In the last five years he has combined several modalities of neuroimaging to understand the role of the white matter networks in the human living brain.