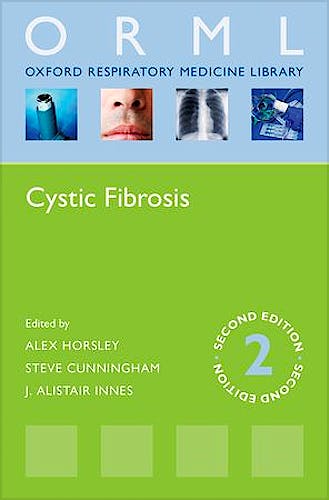 Cystic Fibrosis (CF) is a multi-system disorder, requiring not just respiratory expertise but also management of nutrition, and diabetes, as well psychosocial issues. This pocketbook will be a concise companion for all health care professionals in respiratory medicine, paediatrics, and primary care who manage, or come across, patients with CF. The book will cover all aspects of care, including both paediatric and adult-specific issues and summarize up-to-date literature in a concise and focussed style. There will be an emphasis on the practical aspects of management with the effects of CF in the lung, the microbiology of pulmonary CF, and management of exacerbations covered in separate chapters. The psychosocial aspects of CF care, end of life care and lung transplantation will also be addressed, and potential future therapies reviewed. This second edition will be updated to reflect the UK CF Trust Standards of Care; include emerging organisms, eg Pandorea, and treatment guidelines and Cochrane reviews; an expanded section on physiotherapy; and a new chapter on pharmacopeia.
Readership: The book will appeal to a wide variety of health professionals in respiratory medicine, paediatrics, and primary care.

Alex Horsley, MA, MBChB, MRCP, PhD. NIHR Clinician Scientist at the University of Manchester and Honorary Consultant at the Manchester Adult CF Centre. Dr Horsley graduated from Cambridge and Edinburgh Universities and finished his respiratory training in Leeds and Edinburgh. He completed a PhD on lung physiology and lung clearance index at Edinburgh University with the CF Gene Therapy Consortium and has published and spoken on this widely. His research focuses on the development of early change in the CF lung, lung physiology technologies and the application of these to clinical practice.

Dr Steve Cunningham is Consultant Respiratory Paediatrician at the Royal Hospital for Sick Children, Edinburgh, UK. Steve trained in Respiratory Paediatrics in Edinburgh, Great Ormond Street, London, and Sydney, Australia. He has previously published on models for Retinopathy of Prematurity, but is now more active within the United Kingdom Cystic Fibrosis Gene Therapy Consortium assessing clinical indicators of disease as outcome factors. In addition, Steve has a focus on the role of oxygen as a therapeutic agent in bronchiolitis. Steve is Chair of the Scottish Intercollegiate Guideline Network (SIGN91) Bronchiolitis Guideline, and also a contributing member to the Pharmacology section of the SIGN/BTS Living Asthma Guideline, and the British Thoracic Society Non-CF Bronchiectasis Guideline. He is also Chair of the Asthma UK Scottish Advisory Group.

Dr Alastair Innes, University of Edinburgh. Dr Alastair Innes is Clinical Director of Respiratory Medicine for NHS Lothian and Honorary Reader in Respiratory Medicine at the University of Edinburgh. As a member of the Strategy Group, he heads the clinical part of the CFGT research team in Edinburgh. Alastair qualified in Edinburgh, and trained in Newcastle, London and Los Angeles before returning to a consultant post at the Western General Hospital in Edinburgh. He has worked in Adult Cystic Fibrosis care for 18 years, during which time he was involved in initial trials of nasal CF gene therapy in Edinburgh. Alastair's principal research interests are in novel clinical physiological measurements of airways disease, and their use to monitor disease processes and response to therapy.