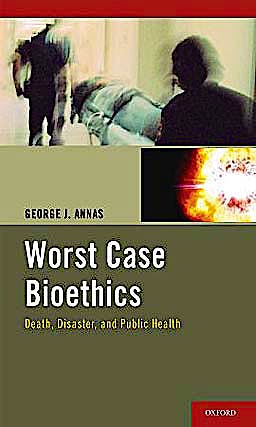 Bioethics, still in its infancy, is routinely called on by the government to provide political cover for controversial public health decisions involving the life and death of Americans. Doomsday or worst-case scenarios are often at the heart of these biopolitical decisions. A central feature of science fiction, these scenarios can impart useful insights. But worst-case scenarios, like Frankenstein's monster, can also be unpredictably destructive, undermining both preparedness and the very values bioethics seeks to promote. Discovering a new flu strain, for example, leads immediately to visions of the 1918 flu pandemic, the worst in human history. Likewise, a "ticking time bomb" scenario leads to the use of the "saving lives" rationale that permits lawyers to justify it and physicians to carry it out.

The worst case charge of "death panels" continues to threaten meaningful healthcare reform in the US. Fundamental change in American healthcare, Annas argues, will require fundamental change in American, including confronting our obsession with technology and our denial of death, and replacing our over-reliance on the military and market metaphors in medicine. "A combination of the ecological and rights metaphors could help us successfully navigate the waters of change."

"Most readers interested in these topics will find this a creative and insightful rubric for examining different aspects of U.S. healthcare and law." - Dr R MacDougall, Saint Louis University