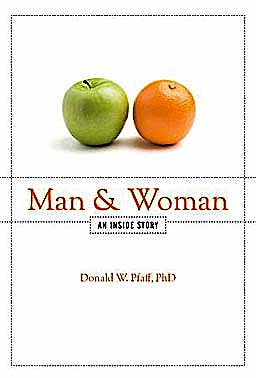 Man and Woman. an inside Story

biología médicabiomedicinamedicina general
ABOUT THIS BOOK

Written by a scientific authority on neurobiology and behavior

The saga of sex differences in brain and behavior begins with a tiny sperm swimming toward a huge egg, to contribute its tiny Y chromosome plus its copies of the other chromosomes. Genetic, anatomic and physiologic alterations in the male ensue, making his brain and behavior different in specific respects from his sister. Brain-wise, specific cell groups develop differently in males compared to females, in some cases right after birth and in other cases at puberty. But genetics and neuroanatomy do not dominate the scene. Prenatal stress, postnatal stress and lousy treatment at puberty all can affect males and females in different ways. The upshot of all these genetic and environmental factors produces small sex differences in certain abilities and huge sex differences in feelings, in pain and in suffering. Put this all together and the reader will see that biological and cultural influences on gender roles operate at so many different levels to influence behavioral mechanisms that gender role choices are flexible, reversible and non-dichotomous, especially in modern societies.

Readership: Primary market would be biological scientists and medical doctors. The educated lay.