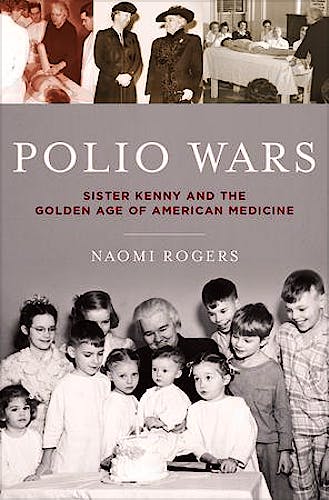 During World War II, polio epidemics in the United States were viewed as the country's "other war at home": they could be neither predicted nor contained, and paralyzed patients faced disability in a world unfriendly to the disabled. These realities were exacerbated by the medical community's enforced orthodoxy in treating the disease, treatments that generally consisted of ineffective therapies.

Polio Wars is the story of Sister Elizabeth Kenny — "Sister" being a reference to her status as a senior nurse, not a religious designation — who arrived in the US from Australia in 1940 espousing an unorthodox approach to the treatment of polio. Kenny approached the disease as a non-neurological affliction, championing such novel therapies as hot packs and muscle exercises in place of splinting, surgery, and immobilization. Her care embodied a different style of clinical practice, one of optimistic, patient-centered treatments that gave hope to desperate patients and families.

The Kenny method, initially dismissed by the US medical establishment, gained overwhelming support over the ensuing decade, including the endorsement of the National Foundation for Infantile Paralysis (today's March of Dimes), America's largest disease philanthropy. By 1952, a Gallup Poll identified Sister Kenny as most admired woman in America, and she went on to serve as an expert witness at Congressional hearings on scientific research, a foundation director, and the subject of a Hollywood film. Kenny breached professional and social mores, crafting a public persona that blended Florence Nightingale and Marie Curie.

By the 1980s, following the discovery of the Salk and Sabin vaccines and the March of Dimes' withdrawal from polio research, most Americans had forgotten polio, its therapies, and Sister Kenny. In examining this historical arc and the public's process of forgetting, Naomi Rogers presents Kenny as someone worth remembering. Sister Kenny recalls both the passion and the practices of clinical care and explores them in their own terms.

Naomi Rogers, PhD, is a tenured Associate Professor in the Program for the History of Science and Medicine at Yale University where she teaches medical students, undergraduates and graduate students.