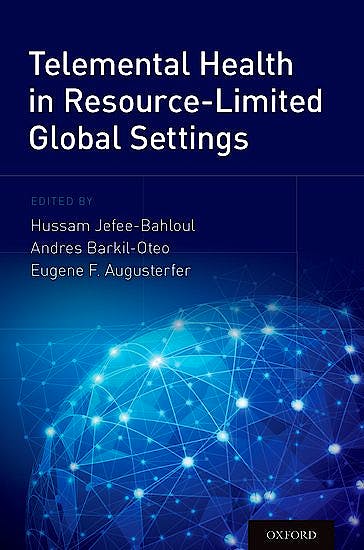 Telemental Health in Resource-Limited Global Settings is a collaborative edited book that aims to introduce the reader to experiences of using the technology in providing mental health care, education and Capacity building approaches in resource limited settings around the globe. The book includes experiences from Africa, India, the Middle East, and resource-limited communities in Australia and the USA. This book will enrich the reader's understanding of the state of TMH globally, and challenges facing this application.

Dr. Andres Barkil-Oteo is a Clinical Assistant Professor of Psychiatry at Yale School of Medicine, and currently a psychiatrist consultant with Doctors Without Borders (MSF). Previously at Yale he was the Medical Director of Acute Care Services at Connecticut Mental Health Center in New Haven CT where he was involved in coordination and provision of mental health services to a large Iraqi refugee population, and undocumented immigrants in New Haven. Dr. Barkil-Oteo's work focuses on using technology to increase capacity of non-specialists to deliver effective and high-quality mental health care in low-income settings. He is the co-founder of the Syrian Tele-mental Health Network. His writings have appeared in Lancet, Lancet Psychiatry, JAMA psychiatry, and his work has been featured on ABC News and Huffington post.

Eugene F. Augusterfer, LCSW, is the Director of Telemedicine for the Harvard Program in Refugee Trauma (HPRT) and a core faculty member of HPRT's Global Mental Health: Trauma and Recovery Program. At HPRT, he has helped develop HPRT's innovative model that addresses the need for sustainable care in post-disaster areas through the use of telemedicine, including mobile technology or mHealth. In addition to his telemedicine work with HPRT, he is actively involved in the broader field of telemedicine as the Chair Emeritus of the American Telemedicine Association Mental Health Group. As such, he has been instrumental in the design, development and implementation of telemedicine programs for a number of organizations, including governmental agencies and private industry. In addition to his affiliation with the HPRT, he maintains a clinical psychotherapy practice and is a member the Georgetown University Medical School - McLean Psychiatric Study Group (founding member), the World Bank Global Mental Heal