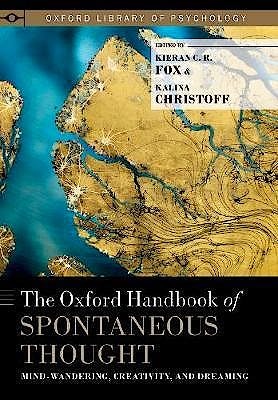 The Oxford Handbook of Spontaneous Thought. Mind-Wandering, Creativity, and Dreaming

Part I: Introduction and Overview

Where do spontaneous thoughts come from? It may be surprising that the seemingly straightforward answers "from the mind" or "from the brain" are in fact an incredibly recent understanding of the origins of spontaneous thought. For nearly all of human history, our thoughts - especially the most sudden, insightful, and important - were almost universally ascribed to divine or other external sources. Only in the past few centuries have we truly taken responsibility for their own mental content, and finally localized thought to the central nervous system - laying the foundations for a protoscience of spontaneous thought. But enormous questions still loom: what, exactly, is spontaneous thought? Why does our brain engage in spontaneous forms of thinking, and when is this most likely to occur? And perhaps the question most interesting and accessible from a scientific perspective: how does the brain generate and evaluate its own spontaneous creations?

Spontaneous thought includes our daytime fantasies and mind-wandering; the flashes of insight and inspiration familiar to the artist, scientist, and inventor; the nighttime visions we call dreams; and clinical phenomena such as repetitive depressive rumination.

In studying such an abstruse and seemingly impractical subject, we should remember that our capacity for spontaneity, originality, and creativity defines us as a species - and as individuals. Spontaneous forms of thought enable us to transcend not only the here and now of perceptual experience, but also the bonds of our deliberately-controlled and goal-directed cognition; they allow the space for us to be other than who we are, and for our minds to think beyond the limitations of our current viewpoints and beliefs.

Kieran C.R. Fox studied neuroscience, philosophy, and world religions during his undergraduate degree at McGill University. He used functional neuroimaging to study the cognitive neuroscience of meditation and spontaneous thought during his Masters and PhD at the University of British Columbia, working with Dr. Kalina Christoff. Currently, he is using intracranial electroencephalography to pursue these lines of research in the Department  of Neurology at Stanford University, working with Dr. Josef Parvizi.

Kalina Christoff is a Professor of Psychology at the University of British Columbia in Vancouver, Canada. Her work focuses on understanding human thought, using a combination of functional neuroimaging (fMRI), behavioral testing, and theoretical work.