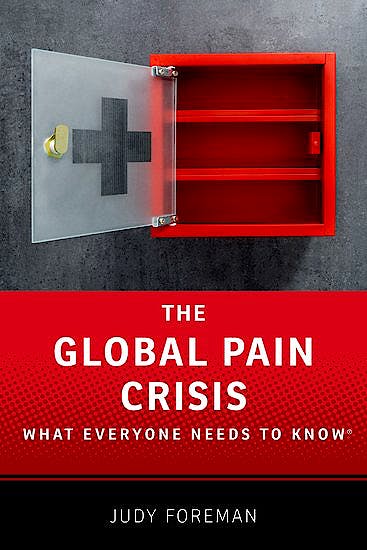 The Global Pain Crisis®. What Everyone Needs to Know

Hundreds of millions around the world live in chronic pain - many in such severe pain they are disabled by it. The Institute of Medicine estimates that chronic pain costs the U.S. alone $560 to $635 billion a year in direct medical costs and lost productivity. Morphine, an effective painkiller, costs only three cents a dose, yet because of excessive regulation in many countries, it is unavailable to millions of people who need it, even at the end of life. The World Health Organization notes that in addition to the one million end-stageAIDS/HIV patients who can't get morphine and other controlled medications, 5.5 million terminal cancer patients, nearly a million people suffering from accidents or violence, and an incalculable number of people living with chronic illnesses and recovering fromsurgery can't get it, either. Women, children, older people, and the poor are disproportionally affected by inadequate pain relief. Physicians know almost nothing about chronic pain, much less how to treat it, for two reasons: medical schools barely teach it and government institutions allot almost nothing to the pain research budget.

In The Global Pain Crisis: What Everyone Needs to Know®, renowned health journalist Judy Foreman addresses the most important questions about chronic pain: what is it, who does it affect most, what works and what doesn't for pain relief in Western and alternative medicines, what are the risks and benefits for opioids and marijuana, and how can the chronic pain crisis be resolved for good?

Foreman's book is a wake-up call for a health problem that affects all people across the globe, at all stages of life. Written in the classic, easy-to-read and quick reference style of the What Everyone Needs to Know® series, The Global Pain Crisis is a must for anyonewhose life or work is affected by chronic pain.

Judy Foreman is a nationally syndicated health columnist who has won more than 50 journalism awards and whose columns have appeared regularly in the Boston Globe, Los Angeles Times, Dallas Morning News and other national and international outlets. Shegraduated Phi Beta Kappa from Wellesley College, served in the Peace Corps in Brazil for three years, and received a Master's degree from the Harvard Graduate School of Education. From 2000 to 2001, she was a Fellow in Medical Ethics at Harvard Medical School. From 2001 to 2004, she was a Lecturer on Medicine at Harvard Medical School. She has also been the host of a weekly, call-in radio show on Healthtalk.com. She is currently a Senior Fellow at the Schuster Institute for Investigative Journalism at Brandeis University.