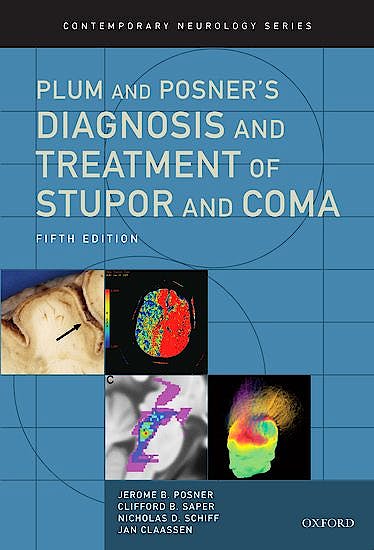 Plum and Posner's Diagnosis and Treatment of Stupor and Coma

Plum and Posner's Diagnosis and Treatment of Stupor and Coma, 5th edition, is a major update of the classic work on diagnosing the cause of coma, with the addition of completely new sections on treatment of comatose patients, by Dr. Jan Claassen, the Director of the Neuro-ICU at Columbia New York Presbyterian Hospital. The first chapter of the book provides an up-to-date review on the brain mechanisms that maintain a conscious state in humans, and how lesions that damage these mechanisms cause loss of consciousness or coma. The second chapter reviews the neurological examination of the comatose patient, which provides the basis for determining whether the patient is suffering from a structural brain injury causing the coma, or from a metabolic disorder of consciousness. The third and fourth chapters review the pathophysiology of structural lesions causing coma, and the specific disease states that result in coma. Chapter five is a comprehensive treatment of the many causes of metabolic coma. Chapter 6 review psychiatric causes of unresponsiveness and how to identify and treat them. Chapters 7 and 8 review the overall emergency treatment of comatose patients, followed by the treatment of specific causes of coma. Chapter 9 examines the long term outcomes of coma, including the minimally conscious state and the persistent vegetative state, and how they can be distinguished, and their implications for eventual useful recovery. Chapter 10 reviews the topic of brain death and the standards for examination of a patient that are required to make the determination of brain death. The final chapter 11 is by J.J. Fins, a medical ethicist who was invited by the other authors to write an essay on the ethics of diagnosis and treatment of patients who, by definition, have no way to approve of or communicate about their wishes.

While providing detailed background for neurological and neurosurgical specialists, the practical nature of the material in this book has found its greatest use among Internists, Emergency Medicine, and Intensive Care specialists, who deal with comatose patients frequently, but who may not have had extensive neurological training.

"This is a great resource. It has been 12 years since the last edition and this edition was necessary to provide the most up-to-date information. (Weighted Numerical Score: 100 - 5 Stars!)" - Shirley Ju, MD, Doodys

"Facing patients with impaired consciousness or coma is among the most urgent and difficult medical emergencies. The 1966 first edition of the "Diagnosis of Stupor and Coma" by Plum and Posner illuminated medical science with an orderly approach in dealing with the comatose patient. In this fifth edition, Saper and colleagues provide a concise state of the art update of this topic necessary for patient care and is a must read for all health care providers who wish to acquire or hone their knowledge to care for these patients." - David A. Hafler, MD, William S. and Lois Stiles Edgerly Professor of Neurology and Immunobiology, Chairman, Department of Neurology, Yale School of Medicine, Neurologist-in-Chief, Yale New Haven Hospital, CT

"Plum and Posner's Diagnosis and Treatment of Stupor and Coma has long provided the best description of both the pathophysiology and the diagnostic approach to disorders of consciousness. Remarkably, this edition was able to integrate the many new diagnostic and therapeutic tools that have become available while still maintaining the clarity and logic that made the book so useful. Every neurologist should read it!?" - John Kessler, MD, Davee Professor, Davee Department of Neurology, Northwestern University, Chicago, IL

"This new 5th Edition of the seminal Plum and Posner's "Stupor and Coma" contributed by a brilliant, and partly renewed, band associating Posner, Sapper, Schiff, and Claassen is not a "USA dormant cop" (anagram of the title), but a worldwide must-read for all those interested by the neurology, physiology and anatomy of consciousness, and by its disorders. Keeping with the very insightful and hitherto unseen tone of the 1972 first edition, this new opus covers almost exhaustively the rich and fast-growing relevant literature, and it can be read at different levels of expertise ranging from fresh college students to emeritus professors, including active neurologists, intensivists, and medical practitioners." - Prof. Lionel Naccache, Sorbonne University, Pitié-Salpêtrière Hospital, Paris, France

"The 5th edition of Plum and Posner's Diagnosis and Treatment of Stupor and Coma is as indelible a contribution as its four prior editions. Continuing in the tradition of the first edition's 1966 grounding in brain structure-function relationships as they apply to disorders of consciousness, this edition is a welcomeupdate to 2007's 4th edition capturing important advances in knowledge in the field. It is a comprehensive, yet succinct, well referenced, scholarly summary of our present day understanding of the molecular basis of consciousness as much as it is a practical clinician's guide to evaluation, treatment, and prognosis. A triumph - indeed! A wonderful and necessary addition to the bookshelf of a wide audience whose interests include the brain's role in modulating normal and disturbed states of consciousness." - David B. Rye MD, PhD, Professor of Neurology, Emory University School of Medicine, Atlanta, GA

"This new edition provides a comprehensive update of a classic and essential text. It preserves the best elements of the original - the succinct formulation of the pathophysiology of coma, the approach to examining a comatose patient - but brings the book solidly into the 21st Century with inclusion of modern technologies and methods. The expanded discussion of the treatment of comatose patients is most welcome, delivering a wealth of information in a concise format. This remains a remarkable book: at once both comprehensive and accessible, equally suitable for extended study and as a quick bedside reference. It deserves a place in the library of every practicing neurologist." - David G. Standaert, MD, PhD, John N. Whitaker Professor and Chair, Department of Neurology, The University of Alabama at Birmingham, AL

Jerome B. Posner, MD is a Professor Emeritus at Cornell Medical College and former Chairman of Neurology at Memorial-Sloan Kettering Cancer center in New York. He graduated from the University of Washington before moving to Cornell University Medical College. He was appointed to the New York Genome Center in 2016. Dr Posner has held many leadership positions throughout his long and distinguished tenure at Weill Cornell and Memorial Sloan-Kettering Cancer Center, including being President of the American Neurological Association. He is a member of the National Academy of Medicine and served on the advisory council of the National Institute of Neurological Diseases and Stroke (NINDS). Clifford B. Saper, MD, PhD is the James Jackson Putnam Professor of Neurology and Neuroscience at Harvard Medical School and Chairman of Neurology at Beth Israel Deaconess Medical Center in Boston. He received his degrees, and did his internship in internal medicine, at Washington University School of Medicine in St. Louis, before doing a neurology residency at Cornell University Medical Center- New York Hospital. He was previously on faculty at Washington University School of Medicine and the University of Chicago. Dr. Saper has received a Javits Neuroscience Investigator Award from the National Institutes of Health, and was elected to the National Academy of Medicine. He is the Editor-in-Chief of the Annals of Neurology. Nicholas D. Schiff, MD is the Jerold B. Katz Professor of Neurology and Neuroscience in the Feil Family Brain and Mind Research Institute at Weill Cornell Medical College. He is a graduate of Stanford University and the Cornell University Medical College and completed his residency in Neurology at the New York Hospital where he trained with Drs. Fred Plum and Jerome Posner He is an elected Fellow of the American Neurological Association and the recipient of several awards, including the 2007 Research Award for Innovation in Neuroscience from the Society for Neuroscience and the 2009 Bakken Pioneer Award from the Earl and Doris Bakken Heart-Brain Institute. Jan Claassen, MD is an Associate Professor of Neurology at Columbia University and Director of the NeuroICU at New York-Presbyterian Hospital. He received a degree in medicine from the University of Hamburg. He underwent post-doctoral research training and clinical training in neurology, electrophysiology, and neurocritical care at Columbia University, NY. His research characterizes physiologic changes following acute brain injury, focusing on novel treatment approaches to potentially improve patient outcomes. His laboratory focuses on the development and bedside integration of novel electrophysiological and imaging techniques study recovery of consciousness in the acute brain injury setting. Dr Claassen has been intimately involved with national and international guideline development for patients with acute brain injury.