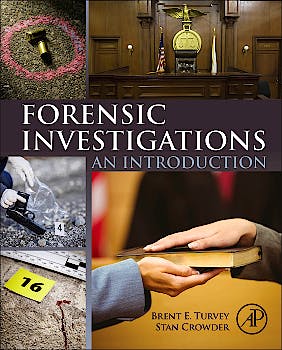 The terms forensic investigator and forensic investigation are part of our cultural identity. They can be found in the news, on television, and in film. They are invoked, generally, to imply that highly trained personnel will be collecting some form of physical evidence with eventual scientific results that cannot be questioned or bargained with. In other words, they are invoked to imply the reliability, certainty and authority of a scientific inquiry.

Using cases from the authors' extensive files, Forensic Investigations: An Introduction provides an overview of major subjects related to forensic inquiry and evidence examination. It will prepare Criminal Justice andCriminology students in forensic programs for more specialized courses, and provide a valuable resource to newly employed forensic practitioners. Written by practicing and testifying forensic professionals from lawenforcement, academia, mental health and the forensic sciences, this work offers a balanced scientific approach, based in the established literature, for broad appeal.

Brent E. Turvey spent his first years in college on a pre-med track only to change his course of study once his true interests took hold. He received a Bachelor of Science degree from Portland State University in Psychology, with an emphasis on Forensic Psychology, and an additional Bachelor of Science degree in History. He went on to receive his Masters of Science in Forensic Science after studying at the University of New Haven, in West Haven, Connecticut. Since graduating in 1996, Brent has consulted with many agencies, attorneys, and police departments in the United States, Australia, China, Canada, Barbados and Korea on a range of rapes, homicides, and serial/ multiple rape/ death cases, as a forensic scientist and criminal profiler. He has also been court qualified as an expert in the areas of criminal profiling, forensic science, victimology, and crimereconstruction. In August of 2002, he was invited by the Chinese People's Police Security University (CPPSU) in Beijing to lecture before groups of detectives at the Beijing, Wuhan, Hanzou, and Shanghai police bureaus. In 2005, he was invited back to China again, to lecture at the CPPSU, and to the police in Beijing and Xian - after the translation of the 2nd edition of his text into Chinese for the University. In 2007, he was invited to lecture at the 1st Behavioral Sciences Conference at the Home Team (Police) Academy in Singapore, where he also provided training to their Behavioral Science Unit. In 2012 Brent completed his PhD in Criminology from Bond University in Gold Coast, Australia. He is the author of Criminal Profiling: An Introduction to Behavioral Evidence Analysis, 1st, 2nd, 3rd and 4th Editions (1999, 2002, 2008, 2011); co- author of the Rape InvestigationHandbook, 1st and 2nd Editions (2004, 2011), Crime Reconstruction 1st and 2nd Editions (2006, 2011), Forensic Victimology (2008) and Forensic Fraud (2013) - all with Elsevier Science. He is currently a full partner, Forensic Scientist, Criminal Profiler, and Instructor with Forensic Solutions, LLC, and an Adjunct Professor of Justice Studies at Oklahoma City University. He can be contacted via email at: bturvey@forensic-science.com.

Dr. Crowder is an assistant professor at Kennesaw State University’s Department of Sociology and is an expert in criminal investigations involving serial killers, serial offenders and the resolution of cold homicide cases, and ethics. He was recently elected president of the Academy of Behavioral Profiling, an association of practitioners and scholars dedicated to the application of evidence-based criminal profiling techniques in investigations and legal proceedings. Dr. Crowder has published in academic journals and contributed a chapter in Forensic Criminology.