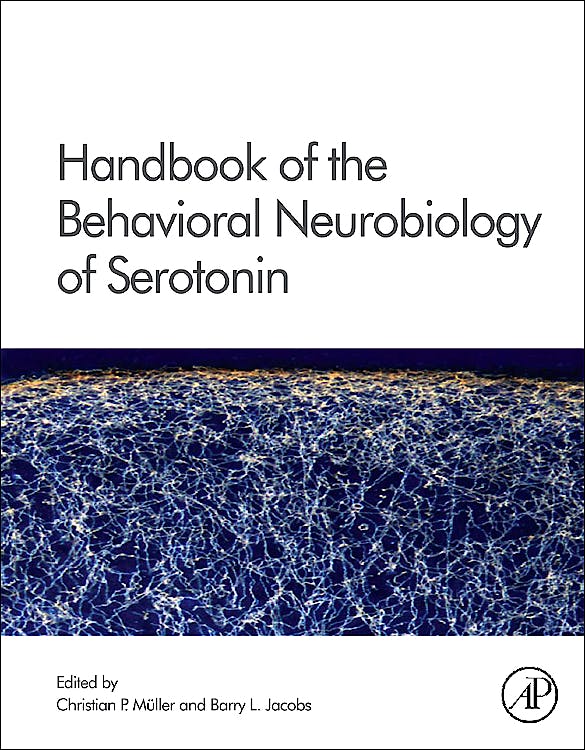 Handbook of the Behavioral Neurobiology of Serotonin, Vol. 18

The last decades of research have not only fundamentally expanded our view on serotonin but also revealed in much more detail an astonishing complexity of this system, which comprises a multitude of receptors and signalling pathways. A detailed view on its role in basal, but also complex, behaviours emerged, and, was presented in a number of single review articles. Although much is known now, the serotonergic system is still a fast growing field of research contributing to our present understanding of the brains function during normal and disturbed behaviour.

This handbook aims towards a detailed and comprehensive overview over the many facets of behavioural serotonin research. As such, it will provide the most up to date and thorough reading concerning the serotonergic systems control of behaviour and mood in animals and humans. The goal is to create a systematic overview and first hand reference that can be used by students and scholars alike in the fields of genetics, anatomy, pharmacology, physiology, behavioural neuroscience, pathology, and psychiatry. The chapters in this book will be written by leading scientists in this field. Most of them have already written excellent reviews in their field of expertise.

The book is divided in 4 sections. After an historical introduction, illustrating the growth of ideas about serotonin function in behaviour of the last forty years, section A will focus on the functional anatomy of the serotonergic system. Section B provides a review of the neurophysiology of the serotonergic system and its single components. In section C the involvement of serotonin in behavioural organization will be discussed in great detail, while section D deals with the role of serotonin in behavioural pathologies and psychiatric disorders.

• The first handbook broadly discussing the behavioral neurobiology of the serotonorgic transmitter system
• Co-edited by one of the pioneers and opinion leaders of the past decades, Barry Jacobs (Princeton), with an international list (10 countries) of highly regarded contributors providing over 50 chapters, and including the leaders in the field in number of articles and citations: K. P. Lesch, T. Sharp, A. Caspi, P. Blier, G.K. Aghajanian, E. C. Azmitia, and others
• The only integrated and complete resource on the market containing the best information integrating international research, providing a global perspective to an international community.
• Of great value not only for researchers and experts, but also for students and clinicians as a background reference.

George Koob, director of the division of Psychopharmacology, Scripps Research Institute, La Jolla, Ca:
"The book has great merit in that the neurobiology of serotonin is quite extensive and has significant implications for our understanding of psychiatric disease and treatment. An update is sorely needed if it synthesizes the area by topic. The scope is comprehensive; I cannot think of anything missed. The utility would be as a reference source for research, and teaching at all levels from graduate school to medical school. Editors are outstanding scientists in the field. Choice of authors is equally outstanding. ... There is really nothing out there that pulls the world's literature on serotonin together. It is hard to get a real solid perspective on how serotonin does everything from impulsivity in suicide to depression to anxiety to mediate the effects of LSD and a tome that explains all of this would fill a niche. Readers would be graduate students, researchers, medical students, residents and university teachers."

Robert Carey, VA Medical Center, Upstate Medical University, Syracuse, NY, CA:
"There has been a major shift away from Dopamine to Serotonin so this is a very timely book proposal and the selected editors/authors are excellent choices to put together an important and successful book."

Boris Quednow, Psychiatric Hospital, University Zurich, Switzerland:
"I waited long for such a handbook of serotonin. This book was overdue for a long time and I think that it has the chance to be a bestseller in this area. The scope is indeed wide but appropriate and the utility of this book is - without any doubt - very high. The editors are highly experienced researchers in this field and the proposed authors belong to the leading scientists in serotonin research. "

Section 2: The neurophysiology of serotonin