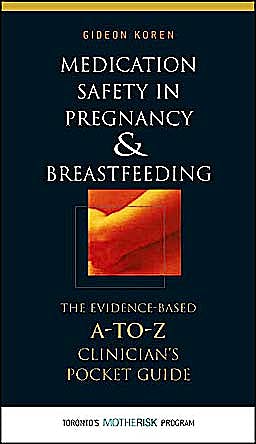 Medication Safety in Pregnancy and Breastfeeding: The Evidence-Based, A-to-Z Clinician's Pocket Guide gives you comprehensive, authoritative coverage on the effects of prescription and over-the-counter drugs as well as herbals, chemicals, andradiologicals, on the mother, fetus, and nursing child. Organized A-Z for ease of use, this hands-on resource also includes evidence-based recommendations from the renowned Motherisk Program at the Hospital for Sick Children in Toronto.

Gideon Koren, MD is Director of the Motherisk Program at the Hospital for Sick Children, Toronto, Ontario, Canada, and Professor of Pediatrics, Pharmacology, Pharmacy, Medicine, and Medical Genetics at the University of Toronto, Canada. The author of over 800 peer-reviewed articles, abstracts, and books, including Nausea and Vomiting of Pregnancy: State of the Art 2000 (The Motherisk Program), he is a Diplomat of the American College of Medical Toxicology and the Royal College of Physicians and Surgeons of Canada, as well as a Senior Scientist of the Canadian Institutes of Health Research.

Section I: Rules of Thumb for Taking Drugs During Pregnancy and Breastfeeding