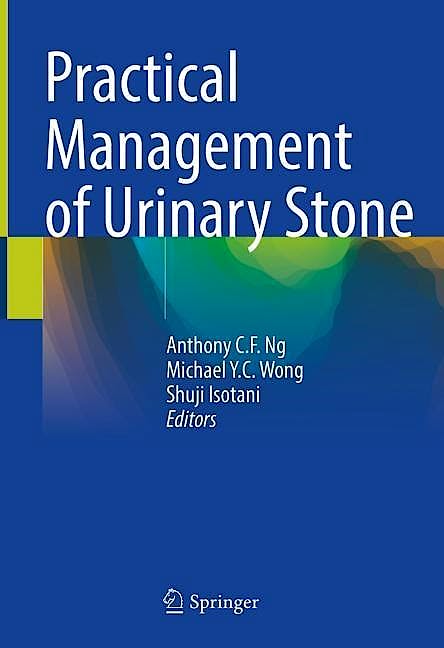 This book aims to provide readers a practical guidance in the management of urolithiasis from diagnosis to surgical treatment. First part introduces related anatomy, symptom, and Imaging of urinary calculi. In the following chapters, techniques, tips and tricks in endourological, ureteroscopic, PCNL, ESWL, and laparoscopic treatment of urinary calculi are described in details with high-resolution illustrations and typical cases. Last part discusses the choice of treatment for some specific case situations. Written by leaders and core faculties from the Asian Urology Surgery Training and Education Group (AUSTEG), this book will be a valuable reference for urologists, as well as practitioners in related disciplines.

Dr Anthony Ng, graduated in the Chinese university of Hong Kong. He then joined Department of Surgery, Prince of Wales Hospital, as surgical trainee. After his basic training, he decided to become an urologist and became a specialist in 2001. Attracted by the rapid development in endourology, he spent one year in Scotland, worked under Mr David Tolley, and gained extensive experience in endo-laparoscopic surgery and stone management.

After completion of his training, Dr Ng decided to join the Chinese University of Hong Kong in 2006 and is currently Professor of the Division of Urology, Department of Surgery, the Chinese University of Hong Kong. He is also current the Course Director of the Robotic Surgery Training Programme, CUHK Hong Kong Jockey Club Minimally Invasive Surgical Skill Centre. He has a wide range of interest, in particular in prostate diseases, urolithiasis, and promotion of men’s health. He was also honored with the Outstanding Young Urologist Ward in 2010 by the Asian Congress of Urology, the International Guest Scholar 2012 of the American College of Surgeons, the Achievement award from the World Chinese Urology Association in the American Urological Association 2014 and the Outstanding Contribution Award by the International Alliance of Urolithiasis 2017. He and his team has also be awarded the Merit award in the Hospital Authority Outstanding Team Award 2019 to recognize their work Hong Kong.

Besides clinical and research work, Dr Ng has also strong commitment in education and teaching. He is currently member of the educational subcommittee of the Hong Kong Urological Association and also the council member of the Urology Board of the College of Surgeons of Hong Kong. He is actively involved in the planning of the urological training in Hong Kong. He is also the founding Chairman of Asian Urological Surgery Training and Education Group (AUSTEG). He has been awarded the Best teacher Award (2008-2009, 2011-2012) of the Faculty of Medicine, the Chinese University of Hong Kong, for his contribution in undergraduate teaching.

Dr Michael Y.C. Wong is currently the Associate Editor (BJUI Knowledge) at the British Journal Urology International. He is the Medical Director at The Urology, Fertility & Gynaecology Centre at Mount Elizabeth Hospital in Singapore.

Michael ‘s subspecialty interest is in Endourology , Female urology and Prostate after completing:

Michael has established an International Standing with the following Global positions:

His research interest is primarily in the minimum invasive surgery, endurological treatment and the technological development of urology surgical devises.

He has published 86 papers. He has also been awarded Annual meeting award of JUA in 2015, Digital Health Startup Support Program Grants4Apps Tokyo in 2016, Best Presentation award 15th Urological Association of Asia Congress in 2017, and Aso award, Japanese society of endourology in 2018.