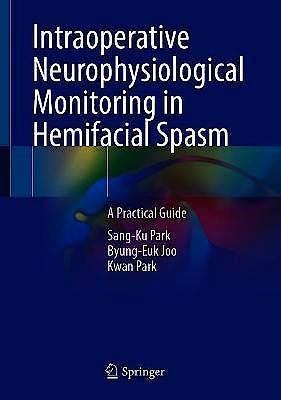 This book is a comprehensive and up-to-date guide to intraoperative neurophysiological monitoring in patients with hemifacial spasm, one of the very few neuromuscular disorders that can be treated surgically.

In addition, detailed explanations and actual photos are provided for various cases, such as when the amplitude of the lateral spread response is slightly smaller during surgery, when it is lost and then measured again, or when the surgery is terminated without disappearing.

The various situations that may occur during surgery are fully covered, and the causes of and solutions to particular challenges are clearly described.

In addition, the results of each test and their association with the postoperative prognosis are explained in detail. The authors have vast experience and recognized expertise in the performance of microvascular decompression surgery and intraoperative neuromonitoring.

The book draws on their practical knowledge and many scientific contributions to offer the very latest insights into the management of hemifacial spasm. It will be an excellent guide for young neurosurgeons, neurological monitoring technologists, and neurological interpreters.

Dr. Sang-Ku Park has been working on intraoperative neurophysiological monitoring (IONM) since 2003, and has been doing a lot of research to elicit optimal euro-monitoring in various neurosurgery operations.In particular, heis most interested in microvascular decompression surgery and hasa lot of research achievements. In the study, the proposal of the real-time BAEPs method and the new method of LSR method greatly increased the reliability of BAEPs and LSR tests, and a little more detailed analysis was possible than the existing methods.

Dr. Sang-Ku Park has been a member of a special director in the Korean Society of Intraoperative Neurophysiological Monitoring (KSINM) since 2015.Since 2018, he has been an editorial board member of the Korean Journal of Clinical Laboratory Science (KJCLS) to advance IONM academically.

Dr. Byung-EukJoo is currently working as an associate professor in theDepartment of Neurology. He hasmajoredinthe field of epilepsy and intraoperative neurophysiological monitoring (IONM). While working as a neurologist, he received various clinical training as well as theoretical knowledge of clinical neurophysiological studies such as electromyography, electroencephalography, and evoked potential tests. Dr.Byung-EukJoo has been conducting and supervising the IONM for various surgeries since 2013. Also, with the knowledge and experience of IONM, he has published several high-value articles on IONM. He is particularly interested in IONM during microvascular decompression surgery for hemifacial spasmand isconducting ongoing research on this area.

Professor Kwan Park Throughalmost 5,000 microvascular decompression surgical cases of his own, Professor Kwan Park has been a noteworthy leader in this field to overcome the cranial nerve rhizopathy including hemifacial spasm and trigeminal neuralgia.

He has also been credited with contributions to the improvement of surgical outcome and prevention of postoperative complications by numerous academic publications.

Professor Park has been recognizedbythe World Neurosurgical Federation for Cranial Nerve Disorders(WNFCND) as one of the best microvascular surgeons in the world.

He is professor emeritus at Sungkyunkwan University and currently working as a professor of neurosurgery at Konkuk University Medical Center, Seoul, South Korea.