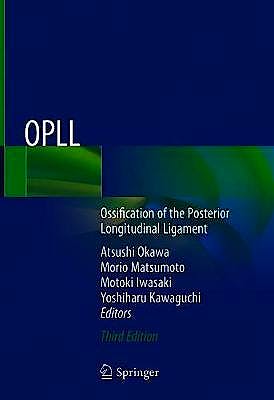 This publication brings together information on all aspects of OPLL - epidemiology, etiology, diagnosis, and treatment. It contains contributions by Japanese researchers and surgeons, including members of the Ministry of Health and Welfare Investigation Committee, and by American surgeons with expertise in the field. Until now, little has been published on the subject in English. This collection of reports is amply augmented with illustrations.

Atsushi Okawa, MD and PhD, is a Professor and Chairman of Orthopaedic and Spinal Surgery at Tokyo Medical and Dental University. He also serves as a director of the university. He has previously served as Vice-president of the Japanese Orthopaedic Association, and as chief researcher in a study group on the ossification of the spinal ligaments, supported by a Japanese Health Labor Sciences Research Grant for six years until 2019. His chief areas of expertise are anterior corpectomy and fusion for OPLL and research into spinal cord monitoring. He has published over 100 papers in these areas.

Morio Matsumoto, MD and PhD, is a Professor and Chairman of Orthopedic Surgery at Keio University. He also serves as President of the Japanese Orthopaedic Association. His research interests include genetic studies on ossification of the posterior longitudinal ligament and idiopathic and congenital scoliosis, as well as clinical studies on various spinal disorders. He has published over 400 peer-reviewed articles in the field of orthopedics.

Motoki Iwasaki is Vice-President of Osaka Rosai Hospital and a Clinical Professor at Osaka University's Graduate School of Medicine. He has previously served as a visiting assistant professor at the Department of Orthopaedic Surgery, UCSF (1995-1997). His main research interests are in OPLL and spinal deformities. He has published over 250 papers and over 60 books. He also serves as an editor for Spine Surgery and Related Research, and for Journal of Orthopaedic Science. He has been honored e.g. with an Academic Encouragement Award (JOA, 1994), New Investigators Recognition Award (ORS, 1997), and Clinical Research Award (CSRS, 2001 & 2003).

Yoshiharu Kawaguchi is a Professor and Chairman of the Department of Orthopaedic Surgery, University of Toyama. He also serves as Educational Chair of Orthopaedic Surgery, AOSpine Asia Pacific region and has previously chaired the International Committee of the Japanese Orthopaedic Association (JOA). His research interests include spinal surgery and the pathology of spinal diseases, including ossification of the spinal ligaments. He has published over 100 papers and eight books. He is a chief editor of the Journal of Spine Research, the official journal of the Japanese Society of Spine Research (JSSR); a deputy editor of Spine Surgery Related Research, the official English-language journal of the JSSR; and a deputy editor of Global Spine Journal, the official journal of AOSpine. He has been honored with various awards, including a JOA basic research award (1996) and JOA clinical research award (2004).