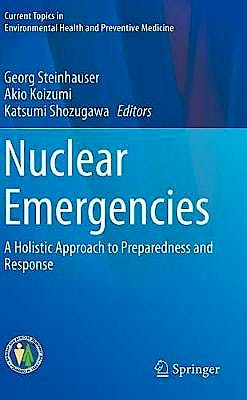 Nuclear Emergencies. A Holistic Approach to Preparedness and Response

1 Two major nuclear emergencies: a comparison between Chernobyl and Fukushima 2 Lessons learned from the Chernobyl accident 3 Late atmospheric effects of a nuclear accident: comparison between the Fukushima Daiichi NPP and Chernobyl accidents 4 Fear of Radiation - A Comparison of Germany and Japan 5 The psychosocial consequences of the Fukushima
disaster: What are we suffering from? 6 Impact of evacuation on lifestyle activity and metabolic status following the Fukushima Daiichi Nuclear Power Plant Accident: Preliminary Findings 7 After the meltdown: Post-Fukushima environmentalism and a nuclear energy
industrial complex in Japan 8 Public relations in times of nuclear emergencies: examples from a medium-sized public university and a small Austrian municipality 9 Fukushima live" - about the role and responsibility of the media 10 Teaching radioactivity: What is the goal of education? 11 Agriculture in Fukushima - Radiocesium contamination of agricultural products 12 Isotopic signatures of actinides in environmental samples contaminated by the Fukushima Dai-ichi Nuclear Power Plant accident 13 The key role of isotopic analysis in tracing the Fukushima nuclear accident-released Pu and radiocesium isotopes in the environment
14 Radioactive iodines in the atmosphere 15 Utilization of Radioxenon Monitoring to Aid Severe Nuclear Accident Response 16 Response to Nuclear Terrorism in Germany 17 Nuclear emergency preparedness in Germany- lessons learned from Fukushima and Chernobyl and their implementation

This book discusses nuclear events that may become imminent threats to the fabric of our society, and elucidates strategies for preventing these threats or mitigating their adverse effects. It addresses multidisciplinary aspects of various nuclear emergencies, including nuclear accidents, terror attacks involving nuclear materials, illicit trafficking of nuclear materials, and problems related to nuclear forensics and strikes with nuclear weapons/warheads.

Very often, nuclear emergencies are only discussed within certain, specific communities. However, this volume brings together experts from various fields to provide a more holistic approach to the problem. Physical, chemical, environmental, social, and medical scientists, together with representatives from the media and authorities, present their views on and strategies for events that cause fear and anxiety among the public - an aspect that can be even more threatening than the direct health effects.

The book offers a valuable guide for nuclear scientists, such as radioecologists, health physicists, radioanalytical scientists and nuclear engineers, as well as decision-makers and national/international authorities.

Georg Steinhauser is professor of Radioecology at Leibniz University Hannover. After his graduation in chemistry (MSc) from University of Vienna (2003), he received his PhD in radiochemistry from Vienna University of Technology in 2005. Supported by a Schroedinger-Fellowship, he joined Prof. Klapoetke's group at Ludwig Maximilian University of Munich, Germany, for one year in 2007. Steinhauser's scientific roots are at Vienna University of Technology, where he worked for 10 years using the Atominstitut's TRIGA research reactor, before he was hired in 2013 by Colorado State University's Department of Environmental and Radiological Health Sciences (assistant professor of radiochemistry). Since 2013, he is member of the Radiation Protection Advisory Board of the Austrian Federal Ministry of Health (Strahlenschutzbeirat). In October 2015, he was hired by Leibniz University Hannover (Institute of Radioecology and Radiation Protection) to assume his current position. His main research focus is environmental radioactivity in Chernobyl and Fukushima as well as environmental nuclear forensics and inorganic chemistry of the f-block elements. Steinhauser has (co-)authored more than 100 scientific publications. Since 2016, he is editor of the Springer journal Environmental Science and Pollution Research. In 2017, Steinhauser organized the Nuclear Emergency Expert Meeting (NEXT) in Hannover.

Akio Koizumi is professor emeritus of Health and Environmental Sciences, Graduate School of Medicine Kyoto University. After his graduation School of Medicine (MD) from Tohoku University (1978) and an internship at Tohoku Rosai Hospital, he received his PhD from Tohoku University 1983. He had a post-doc career in Health and Environmental Sciences Laboratory in Dow Chemical Company at Midland, MI, from 1983 to 1985 and then joined University California, Riverside, as a Research Toxicologist in from 1985 to 1987. He took an associate professor position at Department of Hygiene, Graduate School of Medicine Akita University in 1987 and was promoted to professor in 1993. Since 2000, he moved to the Department of Health and Environmental Sciences, Graduate School of Medicine Kyoto University. In March 2018, he retired from Kyoto University (Professor Emeritus) and got a Director position in the Public Health Institute affiliated to Public Interest Association Kyoto Hokenkai. His main research focus has been health promotion and prevention of diseases. He has organized several research programs, investigating long-term health effects after Fukushima Daiichi Nuclear Power Plant Accident. Koizumi has (co-)authored more than 380 scientific publications with about 13000 citations and was awarded with several famous prizes. He also plays Igo.

Katsumi Shozugawa is assistant professor of Radiochemistry and Environmental Chemistry at University of Tokyo. Since 2004, he joined Prof. Matsuo's group at University of Tokyo, and received his master's and doctor's degree in the field of environmental chemistry. He had been engaged in activation analysis and chemical states analysis using research reactors (JRR-3M, JAEA) and accelerators (Photon Factory, KEK), respectively. After the Fukushima nuclear power plant accident (2011), he is engaged in the quantification of radioactive materials released from the Fukushima NPP, mainly in the evacuation zone. He is also energetically conducting radiation education. As of the end of 2018, he lectured for more than 9000 children, students, and parents.