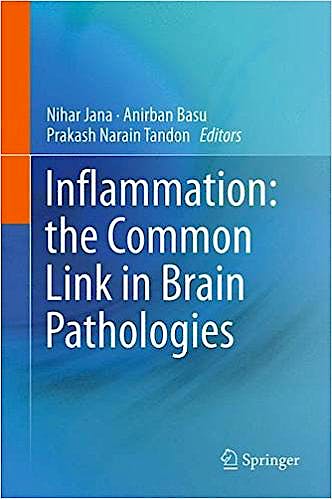 This unifying theme of this book?with sections on mechanisms of defense and neuropathogenesis, neurological diseases, infections of the nervous system, neuropharmacology, and novel therapies?is interactions of the immune and nervous systems. It also discusses the role of inflammation as a key mediator of different brain disorders. There have been significant scientific advances in the multidisciplinary field of neuroimmunology / neuroinflammation in the past decade, and this book, edited under the guidance of Professor P. N. Tandon, fosters communication between those who share an interest in this exciting area, including neuroscientists, immunologists, cell biologists, clinicians and neuropharmacologists.

Dr. Nihar Ranjan Jana presently working as Professor at National Brain Research Centre (NBRC), Manesar. Dr. Jana obtained his Ph.D. from Visva-Bharati University in 1996.  After completing his Post Doctoral training at RIKEN Brain Science Institute, Japan, he joined NBRC in 2001. His laboratory is primarily interested in exploring the role of ubiquitin ligases in cellular protein quality control and how loss of function of quality control ubiquitin ligases lead to neuronal dysfunction or neurodegeneration observed in various neurological disorders. Dr. Jana is elected fellow of National Academy of Sciences, India (2008) and West Bengal Academy of Science and Technology (2012). He is a recipient National Bioscience Award (2008, DBT) and TATA Innovation Fellowship (2014, DBT), VASVIK award (2012) and KT Shetty memorial award (2013 from Indian Academy of Neurosciences). Currently, he is serving as an editorial board member of PLOS ONE, Frontier of Molecular Neurosciences and Annals of Neurosciences.

Anirban Basu is a Senior Scientist and Additional Professor at National Brain Research Center, Manesar, Haryana. He received his Ph.D. degree in Immunology from the Indian Institute of Chemical Biology, Kolkata. He then obtained Postdoctoral training in Neuro-immunology at Neural and Behavioral Science Dept at Pennsylvania State University College of Medicine, US. So far he has trained 4 Masters students, 9 PhD students and 9 postdocs, and numerous short term and long term research trainees in his lab. Dr. Basu has long been interested in curing diseases of the nervous system. His current research is focused on identifying the role of microglia and neural stem/progenitor cells in the healthy and diseased central nervous system, with specific reference to CNS infections, and neurodegenerative diseases. The group of students who currently work with him is testing strategies to develop disease modifying therapy by abrogating inflammation in CNS disorders. Dr Basu is the recipient of National Bioscience Award for Career Development (2010), Vasvik Industrial Research Award (2011), Dr. J.B. Srivastav Oration Award (2011), Rajib Goyal Prize (2012) and NASI- Reliance Industries Platinum Jubilee Award (2013), Tata Innovation Fellowship (2015) from the Department of Biotechnology, and Senior Scientist Oration Award (2015) from the Indian Immunology Society. He is also an elected Fellow of the National Academy of Sciences, India and West Bengal Academy of Science and Technology. Dr Basu sits on the editorial boards of the Journal of Neurochemistry, Scientific Reports, Journal of Neuroinflammation, PLoS One, Frontiers in Molecular Neuroscience, and Metabolic Brain Diseases. He is also a faculty member in the Faculty of 1000 in the section Neurological Disorders.

Prakash Narain Tandon National Research Professor and President of National Brain Research Centre Society, Manesar, Gurgaon-122051. Residential Address: House No. 1, Jagriti Enclave, Vikash Marg Extension, New Delhi, Tel: 011-22163272. Date of birth: 13 August 1928. He has graduated with an MBBS and MS from the University of Lucknow in 1950 and 52 respectively. Trained at the University of London and obtained his FRCS in 1956. He further obtained his specialist training in neurosurgery at Oslo, Norway and Montreal, Canada. After a brief tenure as a professor at the K.G. Medical College, Lucknow (1963–65), he moved to the prestigious All India Institute of Medical Sciences, New Delhi where he founded the neurosurgery department where he has been a professor of neurosurgery. He received Bhatnagar award (CSIR), fellow of the National Academy of Medical Sciences and Indian National Science Academy, He also served as President of Indian National Science Academy in 1991-92. He been awarded Padma Shri (1973) and Padma Bhushan (1991) by the Government of India.