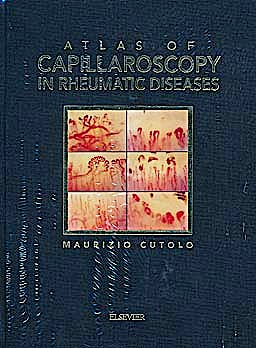 Atlas of Capillaroscopy in Rheumatic Diseases

Primary Raynaud phenomenon, as clinical symptom of altered peripheral microcirculation, affects 5ˆ15% of individuals in the general population and almost 15% of cases will shift from the primary to the secondary phenomenon (associated with the systemic sclerosis and other connective tissue diseases) in a mean time of 29.4±10 months.
Nailfold videocapillaroscopy (NVC) represents the safest, noninvasive, less expensive and reliable method to analyze microvascular abnormalities in systemic sclerosis and the findings can be scored and quantified.
Since microvascular damage and dysfunction represent early markers of systemic sclerosis and are clinically mirrored by secondary Raynaud phenomenon, the diagnostic, prognostic and therapeutic implications of microvessel morphological analysis by NVC enables the best clinical management.
Reduced capillary density on NVC predict and correlates with a high risk of developing digital skin ulcers and the presence of pulmonary arterial hypertension, and can therefore be used as a marker of systemic sclerosis severity and progression, as well as to monitorize the therapeutical effects.
Growing interest and intense recent research on capillaroscopy have resulted up to 2010 in almost 350 papers reported in PubMed in the last 10 years, accounting for almost 50% of the total number of publications on the subject from 1951.
However, an atlas explaining the capillaroscopy in rheumatic diseases in a modern, updated and physiologically-based way with large discussion of clinical cases was lacking and is now available.
The authors of the atlas have been selected among the best international experts of the field and are all members of the board of the international courses on capillaroscopy supported by the European Ligue Against Rheumatic Diseases (EULAR).
The reader after a carefull and progressive analysis of the text will learn to understand the capillaroscopic findings that characterize the most important rheumatic diseases and will use the atlas for his daily clinical practice.