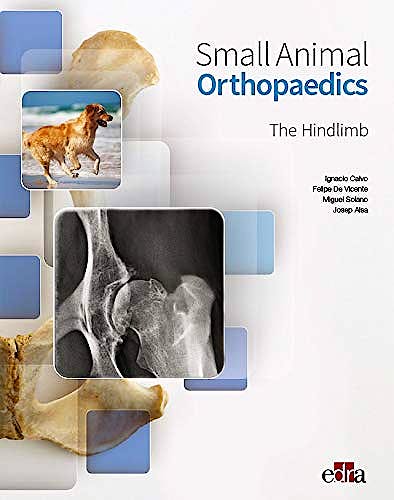 This book describes, with the help of high-quality images, the different surgical techniques used to treat the main orthopaedic conditions affecting the hindlimbs in cats and dogs. Drawing from their experience, the authors provide practical information on how to plan and perform these surgical procedures and how to manage patients postoperatively.

Ignacio graduated in veterinary medicine from the University of Córdoba (Spain) in 2000. After a training period at the Complutense University of Madrid, he undertook a rotating internship and residency in small animal surgery (orthopaedics) at the University of Glasgow (United Kidngom). He was awarded the RCVS Certificate in Small Animal Surgery (CertSAS) in 2009 and the European Diploma in Small Animal Surgery (Dipl ECVS) in 2012. In 2016 he received his PhD from the Complutense University of Madrid for his work on the tibial tuberosity advancement procedure. Ignacio has worked at the vet schools of the universities of Glasgow and Dublin and at Fitzpatrick Referrals (United Kingdom). He is currently the Head of Orthopaedic Surgery at Hospital Veterinario Vetsia in Leganés, Madrid. He is the musculoskeletal section editor of BMC Veterinary Research (impact factor 1.9), as well as a member of the AOVET European board and the AOVET international education commission.

Felipe graduated in veterinary medicine from the Complutense University of Madrid (Spain) in 2003 and was awarded a PhD from the same university in 2009. He completed a rotating internship at Glasgow University in 2008 and a small animal surgery residency at University College Dublin in 2012. He was awarded the European Diploma in Small Animal Surgery from the European College of Veterinary Surgeons (ECVS) in 2014, and became an RCVS-recognised specialist in this discipline in 2016. Felipe has worked in private referral hospitals in the United Kingdom, and has been Lecturer in Small Animal Surgery at the University of Glasgow and Senior Lecturer and Head of Service of the Orthopaedic Department at the University of Liverpool. Since September 2018 he has been working as a specialist in surgery at Pride Veterinary Centre, a referral centre in Derby (England), and at Hospital Veterinario Puchol in Madrid (Spain).

Miguel graduated from the Autonomous University of Barcelona (Spain) in 2007. After a year working in a referral emergency centre in Barcelona, he moved to the UK in July 2008 where he undertook a surgical internship at Fitzpatrick Referrals, gaining extensive experience in all aspects of small animal orthopaedics and neurosurgery. Following his interest in small animal surgery, he moved to Cambridge to take up a one-year junior training scholarship at the University of Cambridge before completing a three-year European College of Veterinary Surgeons-approved residency programme in small animal surgery at Fitzpatrick referrals and VRCC (UK). Miguel became a diplomate of the ECVS in February 2015. He continues to work as a senior clinician at Fitzpatrick Referrals combining a very busy case load with clinical research.

Josep graduated from the Autonomous University of Barcelona in 1999. After several years working as a veterinary clinician in Spain and the UK, in 2007 he undertook a rotating internship at Davies Veterinary Specialists in the UK. He then spent two years in a hospital in London before starting, in 2011, his residency in small animal surgery at University College Dublin (Ireland). From 2014 to 2018, Josep worked as a lecturer and specialist in small animal orthopaedics and soft tissue surgery at the University of Glasgow (Scotland). In 2018 he joined the surgery team at North Downs specialist referrals in South East England and will be joining the University of Tennessee in 2019. He is an ECVS and RCVS-recognised specialist in small animal surgery.