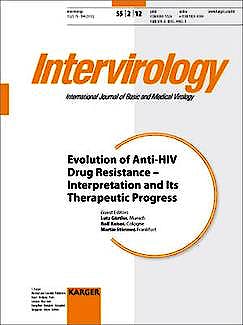 Evolution of Anti-Hiv Drug Resistance - Interpretation and Its Therapeutic Progress

This publication illustrates a recent update on the antiretroviral drug resistance determination, its computer program assisted interpretation and beneficial effect on the treatment of HIV-1 and HIV-2 infected patients. Starting with the description of the human immunodeficiency viruses and their mutation frequency it turns to methods of resistance determination and bioinformatical guided algorithm of interpretation, fate of patients in large cohorts benefitting from improved therapeutic interventions and limitations in individual patients and HV-2 infection. Furthermore Pyro 454 sequencing and interpretation of single amino acids in the context of all involved mutations in antiretroviral drug resistance is described and R5 and X4 differentiation by nucleic acid sequencing and susceptibility of HIV to a maraviroc treatment regimen is specified.

This special issue of Intervirology will be of benefit to medical doctors involved in the treatment of HIV infected patients as well as to pharmacologists, bioinformaticians and laboratory personnel working in the field of drug resistance analysis, drug design and antivirals. Furthermore it is a valuable resource for researches involved in the confection of new drugs and interactions of old drugs and who are involved in assays of antiviral drug resistance.