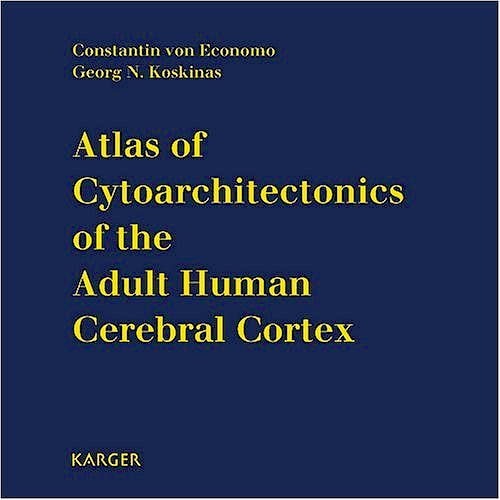 Atlas of Cytoarchitectonics of the Adult Human Cerebral Cortex

A milestone in neuroscience research, this high-profile Atlas depicts the cellular structure of practically every area of the human cortex with direct applications to current research in brain function. The entirety of the 112 original microphotographic plates, brilliant achievements in scientific microphotography and representing the 107 cytoarchitectonic areas of the human cerebral cortex, are reproduced in full size - large enough to be used for teaching purposes. An extensive introduction places the cytoarchitectonic studies of von Economo and Koskinas in a historical as well as a modern perspective, summarizing the essence of their findings and providing Brodmann area correlations. Biographies of von Economo and Koskinas and complete listings of their hard-to-find works are included in the Appendix.

Originally published in German in 1925, it was considered a 'royal gift to science'. Revising Brodmann's nomenclature of 1909, the Nobel prize nominee von Economo and his colleague Koskinas took cytoarchitectonics to a new zenith, filling in gaps left by Brodmann on normal cortical structure, and documenting detailed findings in the frontal, parietal, temporal and occipital lobes, the insula, hippocampus, and superior limbic region.

Far from being of purely academic or historical interest, this essential guide for all research on the cerebral cortex is of fundamental value to investigators in the brain and behavioral sciences, including basic, cognitive and evolutionary neuroscience, neuroanatomy, neurophysiology, neuroimaging, neuropsychology and neurolinguistics, as well as to physicians in the clinical fields of neurology, neuropathology, neurosurgery and psychiatry.