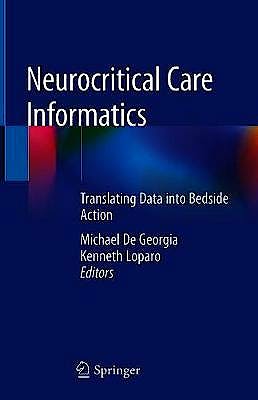 Health care in the twenty-first century requires intensive use of technology in order to acquire and analyze data and manage and disseminate information. No area is more data intensive than the neurointensive care unit. Despite the massive amount of data, however, providers often lack interpretable and actionable information. This book reviews the concepts underlying the emerging field of neurocritical care informatics, with a focus on integrated data acquisition, linear and nonlinear processing, and innovative visualization in the ICU. Subjects addressed in individual chapters are thus wide ranging and encompassing, for example, multimodal and continuous EEG monitoring and data integration, display of data in the ICU, patient-centered clinical decision support, optimization of collaboration and workflow, and progress towards an "integrated medical environment". All of the nine chapters have been written by international thought leaders in the field.

Kenneth A. Loparo, PhD is the Arthur L Parker Professor in the Department of Electrical Engineering and Computer Science at Case Western Reserve University, holds academic appointments in the Departments of Biomedical Engineering and Mechanical and Aerospace Engineering in the Case School of Engineering, and is the Faculty Director of the Institute for Smart, Secure and Connected Systems and Co-Academic Director of the Internet of Things Collaborative. He has received numerous awards including the Sigma Xi Research Award for contributions to stochastic control, the John S. Diekoff Award for Distinguished Graduate Teaching, the Tau Beta Pi Outstanding Engineering and Science Professor Award, the Undergraduate Teaching Excellence Award, the Carl F. Wittke Award for Distinguished Undergraduate Teaching and the Srinivasa P. Gutti Memorial Engineering Teaching Award. He was chair of the Department of Electrical Engineering from 2013-2017, associate dean of engineering from 1994 -1997, chair of the Department of Systems Engineering from 1990 -1994. Loparo is a fellow of a Life Fellow of the IEEE and a fellow of AIMBE, his research interests include stability and control of nonlinear and stochastic systems with applications to large-scale electricity systems including generation and transmission and distribution; nonlinear filtering with applications to monitoring, fault detection, diagnosis, prognosis and reconfigurable control; information theory aspects of stochastic and quantized systems with applications to adaptive and dual control and the design of distributed autonomous control systems; the development of advanced signal processing and data analytics for monitoring and tracking of physiological behavior in health and disease.