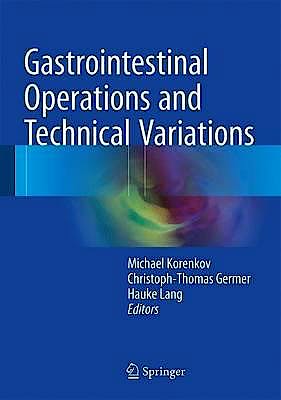 In this book, leading experts provide step-by-step, illustrated descriptions of their standard surgical techniques (open and laparoscopic) for diverse gastrointestinal indications and their preferred modifications when confronted by challenging circumstances associated with an increased risk of intra- or postoperative complications. The provision of several points of view for each surgical indication ensures that approaches from the conservative to the more radical are conveyed. It is clearly explained in which situations use of the described technical variations may be indicated, and practical tips are provided on the avoidance of complications. In addition, important medicolegalissues are discussed and guidance is offered on risk assessment and decision analysis within the surgical setting. The book will be an invaluable aid to decision making and practice for every gastrointestinal surgeon.

Born in Moscow in 1962, Michael Korenkov graduated from Elementary and High School N. 654, Moscow in 1979 and from First Moscow Sechenow Medical Institute in 1985. He was then appointed for surgical training in the Central Institute for Specialist Training of Doctors, Botkin’s Hospital in Moscow for 3 years. After completing his surgical training he was engaged as a scientific assistant in the 1st Department of Surgery in the Central Institute for Specialist Training of Doctors in Moscow. In 1990 took place PhD graduation and promotion to Assistant of Professor in the same department. Dr. Korenkov changed to Prof. Hans Troidl in the 2nd Department of Surgery, University of Cologne, Germany and worked under his direction as a surgical trainee and stuff surgeon until 2003. He has been certificated as a general surgeon (Facharzt fuer Chirurgie) in 2001, as a visceral surgeon (Zusatzbezeichnung fuer Viszeralchirurgie) in 2003 an as a proctologist in 2006. Dr. Korenkov changed as attending (Oberarzt) under Prof. Th. Junginger in Department of Surgery, University of Mainz, Germany. As a stipendiary of the German Society for Surgery in 2005 Dr. Korenkov had fellowships in IRCAD Strasbourg under Prof. Jacques Marescaux; St. Mark’s Hospital, London under Prof. John Nicholls;  Institut de ChirurgieLaparoscopique de Bordeaux, Bordeaux under Prof. Jacques Perissat and Dr. Dulucq; Cleveland Clinic Florida under Prof. Steven Wexner. After his habilitation for venia legendi in 2004 he advanced to become an associate professor in same year and full professor in 2011. Since 2008 is Dr. Korenkov Head of Department for General and Visceral Surgery in Klinikum Werra-Meissner, Teaching Hospital University of Goettingen, Germany. His studies focus mainly on bariatric surgery and coloproctology. He has published more than 50 papers in PubMed-indexed journals and edited 3 books in Springer Publisher and one book in Huber Publisher.