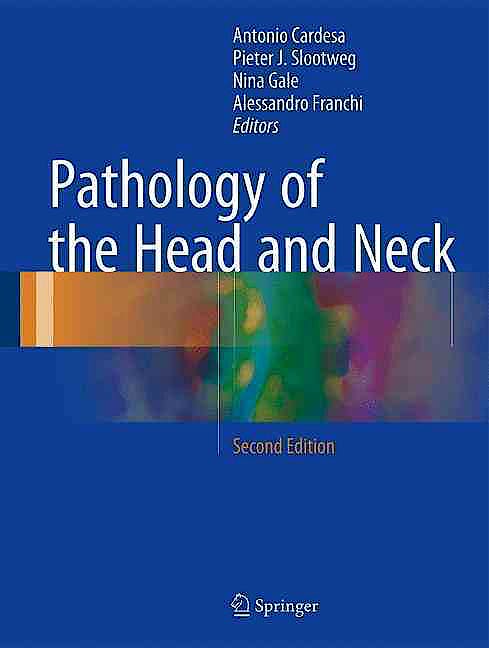 Pathology of the Head and Neck

This book provides a comprehensive description of the pathology of the head and neck region, concentrating especially on those pathologic entities that are unique to or characteristic of the head and neck. The new edition retains the ten chapters of the first edition, all updated and improved, and additionally contains seven entirely new chapters and a more detailed subject index. The number of illustrations has been substantially increased, and various lesions absent in the original edition have been included. Throughout, attention is paid to correlation of pathology with epidemiology, clinical features, pathogenesis, and molecular genetics. Differential diagnosis is addressed, and information is also provided on staging, prognosis, and therapy. The authors include foremost experts in the field, some of whom are senior members of the Working Group on Head and Neck Pathology of the European Society of Pathology.

Alessandro Franchi gained his Medical Degree Summa cum Laude from the University of Florence Medical School, Italy, in 1987 and subsequently entered residency training programmes in Neuropathology and Anatomic Pathology at University of Verona Medical School and University of Florence Medical School, respectively. From 1993 to 2001, Dr. Franchi was Assistant Pathologist at Azienda Ospedaliera Careggi, Florence, Italy. In 1996 he also became Visiting Pathologist at the Department of Pathology, Memorial Sloan-Kettering Cancer Center, New York. Since 2001 he has been Associate Professor of Anatomic Pathology at University of Florence Medical School. In 2009 he became Secretary of the ESP Working Group on Head and Neck Pathology. Dr. Franchi’s research has focused on head and neck pathology, bone and soft tissue pathology, dermatopathology, and ultrastructural pathology. He has published more than 150 scientific publications in peer-reviewed journals and 12 contributions to textbooks, and has given more than 200 presentations at national and international congresses.

Nina Gale graduated in medicine from the University of Ljubljana in 1975, and subsequently undertook a Residency in Pathology at the university’s Institute of Pathology. She obtained a Doctorate of Science in 1985. Dr. Gale has been Head of the Department of Head and Neck Pathology, Institute of Pathology, Faculty of Medicine, University of Ljubljana since 1983, and in 2001 she became Director of the Institute. She was appointed Professor of Pathology in 1997, having previously served as Visiting Professor at the College of Medicine, University of Cincinnati (Division of Molecular Oncology, Department of Otolaryngology – Head and Neck Surgery). Dr. Gale has undertaken research work in various areas of head and neck pathology and played an active part in reviewing and further formulating histological criteria of the Ljubljana classification of squamous intraepithelial lesions. Since 2004 she has been a member of the editorial board ofVirchows Archiv. She has authored more than 150 scientific and other papers in different medical and scientific journals as well as 12 book chapters and a previous book.

Pieter Slootweg graduated in dentistry at the Utrecht University Dental School in 1974. He trained in Oral Pathology and completed his PhD thesis on mixed odontogenic tumours in 1979. In 1981, he obtained his MD at the Utrecht University Medical School and in 1988 he qualified as consultant histopathologist. In 1995 Dr. Slootweg became Professor of Oral Pathology at the Utrecht University Medical Center. Since 2004, he has been Professor of Pathology at the Radboud University Medical Centre at Nijmegen. He has published more than 200 papers on various topics in head and neck pathology and has contributed to several books on surgical pathology of the head and neck. His research interest is in molecular biology of head and neck squamous cell cancer and surgical pathology of salivary glands and maxillofacial bones. He is on the editorial boards of Virchows Archiv, the Journal of Craniomaxillofacial Surgery, the International Journal of Oral and Maxillofacial Surgery, Oral Oncology, Pathology Research International, and Oral and Maxillofacial Surgery.