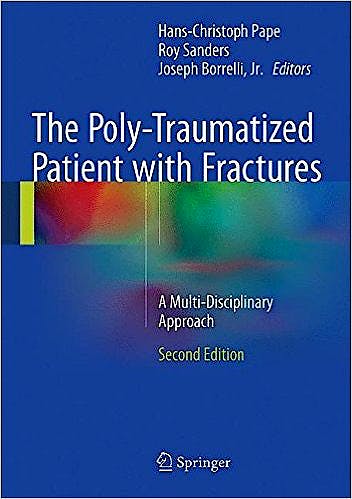 The Poly-Traumatized Patient with Fractures. a Multi-Disciplinary Approach

This guide provides practical information on the care of patients with blunt injuries that will be invaluable for emergency personnel, trauma surgeons, orthopaedic traumatologists, and anesthesiologists. The management of both truncal injuries (head, chest, abdomen) and fractures of the extremities, the pelvis, and the spine is covered in a condensed fashion, emphasizing key information. Care is taken to highlight associated injuries that may alter the decision making in patients with polytrauma. The new, revised edition takes full account of three major developments of recent years, namely the increasing economic pressure on health care systems, including trauma care, the changes in trauma systems and related education, and the improved survival of polytrauma patients. In view of the greater recognition of the physical and psychological long-term sequelae of major injuries, post-traumatic stress disorder is discussed in depth in this new edition.

Hans-Christoph Pape graduated in 1988 from Hannover Medical School, where he then completed a residency in trauma surgery. He was appointed Full Professor of Trauma Surgery at the School in 2000. Between 2003 and 2005 Dr. Pape was also a Visiting Professor at Harvard Medical School, the University of Alabama, and the University of Texas. In 2005 he was appointed Associate Professor in Traumatology at the University of Pittsburgh Medical Centre, and he is currently W. Pauwels Professor and Chairman of the Department of Orthopaedic/Trauma Surgery at the University of Aachen Medical Center, Germany. During his career, Dr. Pape has received many awards of note, including the Novartis Prize (2005), the Swiss AO Foundation Annual Award (2006), and the Kappa Delta Award from the American Academy of Orthopedic Surgeons (2008). He is the Editor in Chief for Open Access Emergency Medicine and a Section Editor for Injury and the European Journal of Trauma. Dr. Pape has been the lead author on 81 publications in peer-reviewed journals and co-author of a further 220. He is also the editor or author of several important books and has led many courses on polytrauma management.

Roy W. Sanders gained his MD from New York University School of Medicine and later undertook a fellowship in musculoskeletal trauma at Vanderbilt University Medical Center as well as an AO/ASIF Jack McDaniels Memorial Fellowship in Munich and Chur (Switzerland) and an AO Foot Fellowship in Seattle. He was appointed Clinical Assistant Professor of Orthopaedics at the University of South Florida in 1989, and then Associate Professor in 1992 and Professor in 1996. Since 1991 Dr. Sanders has been Chief of the Department of Orthopaedics and Director of the Orthopaedic Trauma Service at the Tampa General Hospital, Florida. In addition, since 1995 he has been President and Chairman of the Board of Florida Orthopaedic Institute. Dr. Sanders has been Editor-in-Chief of the Journal of Orthopaedic Trauma since 1996. He is also a past president of the Orthopaedic Trauma Association. Each year from 1992 to 2006 he was elected by peers for inclusion in Best Doctors in America. Dr. Sanders is the author of 118 articles in peer-reviewed journals and has edited eight books.