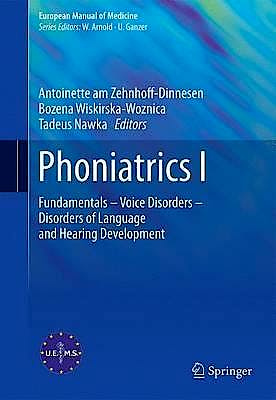 This is the first of two volumes that draw on the specialized insights and extensive clinical experience of phoniatric experts in order to offer a basis for the development of concerted European training standards in phoniatrics, with the goal of guaranteeing a high quality of care for European patients in all age groups. The interdisciplinary character of phoniatrics is mirrored in the inclusion of valuable contributions from a range of other medical and non-medical disciplines. This volume focuses on voice disorders and disorders of language and hearing development. In each case a wide range of particular kinds of communication loss are considered. Basic aspects are fully addressed, and guidance provided on diagnostic methods, differential diagnosis, prevention, treatment/rehabilitation, and prognosis. An introductory section also discusses the fundamentals of phoniatrics. The reader will benefit from numerous color photos and tables as well as supplementary electronic material, including audio and video examples. This book is intended for residents and practitioners in phoniatrics and also for ENT physicians, medical students, logopedists, and speech and language pathologists and therapists.

Tadeus Nawka studied medicine at Humboldt University in Berlin and then trained in ENT in Cottbus before specialising in Phoniatrics and Pedaudiology at the Charite in Berlin. He completed his scientific education at Harvard Medical School in 1994, after which he became Assistant Professor for ENT/Phoniatrics and Pedaudiology. After a three years term as a surgeon at the ENT department of the St. Georg Hospital in Hamburg, in 1999 Dr. Nawka became Associate Professor and Head of the Department of Phoniatrics and Pedaudiology at the University of Greifswald. Since 2009 he has been Professor and Head of the Division of Voice and Swallowing at the Department of Audiology and Phoniatrics, Charite - University Medicine Berlin. His main interests are diagnosis and treatment of voice and swallowing disorders and phonosurgery.

Bozena Wiskirska-Woznica studied at the Medical University of Gdansk before specializing in Otorhinolaryngology at the Medical University of Bydgoszcz and in Phoniatrics and Audiology at the Poznan University of Medical Sciences. In 1981 she completed her doctoral thesis on EMG examination of cricopharyngeal muscle in laryngectomised. In 2002 she subsequently gained her PhD and Habilitation in Phoniatrics & Audiology from the Poznan University of Medical Sciences, the latter for work on complex voice estimation in organic and functional voice disorders. Dr. Wiskirska-Woznica is currently Head of the Chair & Department of Phoniatrics and Audiology at Poznan University of Medical Sciences. She is also President of the Phoniatric Section of the Polish Otorhinolaryngology, Head & Neck Surgery Society and a board Member of the UEP. She is the author or co-author of more than 80 original papers in Polish and English language medical journals and over the 15 chapters in several books.

Katrin Neumann studied medicine at the University of Leipzig. She is currently Head of the Department of Phoniatrics and Pediatric Audiology and of the Hearing and Cochlea Implant Center at the University of Bochum, Germany. Dr. Neumann chairs the Technology Committee of the Coalition on Global Hearing Health. In addition, she has chaired the Audiology Committee of the International Association of Logopedics and Phoniatrics (IALP), where she also works as a consultant on the Fluency Committee. She contributes to the work of the WHO Prevention of Deafness and Hearing Impairment Team as a member of the WHO Expert Advisory Board and is WHO Officer of the Union of European Phoniatricians (UEP). Dr. Neumann is an Associate Editor of several international journals and has received national and international awards, including the 2014 European Phoniatrics Hearing EUHA Award. Her research interests are wide ranging, and she has published more than 190 original articles, monographs, and book chapters.