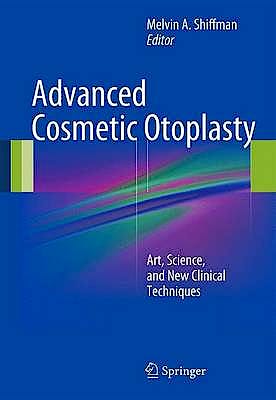 In this book, international experts present up-to-date techniques of otoplasty in which they have extensive personal experience. Both new and modified procedures are described with the aid of a wealth of high-quality illustrations. In addition to these detailed descriptions, ear embryology and anatomy, psychological issues, postoperative care, possible risks and complications, and outcomes are extensively covered in order to provide the reader with a state of the art account of all aspects of cosmetic otoplasty. Throughout, the contributors are inventive and eloquent in guiding the reader to a better understanding that optimal results of otoplasty will be achieved only with a more refined approach than the routine use of simplified techniques. This book will be of value to both students (residents and fellows) and experienced cosmetic, plastic, maxillofacial, and general surgeons.

Melvin A. Shiffman, MD, JD, FCLM, received his MD from Northwestern University School of Medicine in 1957 and completed his residency in general surgery in 1964 at the Veterans Administration Hospital, Long Beach, California. Since then he has been continuously involved in the practice of oncologic surgery, reconstruction, and cosmetic surgery. Since 2002, Dr. Shiffman has been Chair of the Section of Surgery at the Newport Specialty Hospital (formerly the Tustin Hospital and Medical Center), and in 2009-10 he served as President of the American College of Legal Medicine. He is Editor Emeritus of the American Journal of Cosmetic Surgery, a member of the Scientific Committee for the American Journal of Aesthetic Medicine, and an examiner for the International Board of Cosmetic Surgery. Dr. Shiffman is the recipient of many honors and is a fellow of various colleges and societies. He has published almost 300 articles, authored or edited more than 30 books, and written more than 140 book chapters.