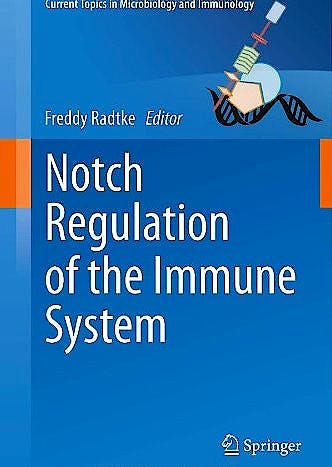 Notch Regulation of the Immune System (Current Topics in Microbiology and Immunology, Vol. 360)

Notch signaling regulates many cell fate decision and differentiation processes during embryonic development and tissue homeostasis. Moreover, disregulation of the pathway is associated with human disorders and cancer. In the last 15 years it became evident that Notch plays important roles in the hematopoietic system as well as in the regulation of immune responses.
This volume of Current Topics in Microbiology and Immunology covers divers topics of Notch function within the immune system. The review series starts with an overview on the role of Notch function for the generation, and specification of hematopoietic stem cells during mouse development and adulthood. Chapters follow describing molecular players and specific functions of Notch during T cell lineage commitment and maturation in both mouse and human. Once T cell development is accomplished and T cells have been positively and negatively selected, they migrate from the thymus to the periphery. There they regulate host defense to pathogens as well as immune homeostasis, which is described in two chapters of this series. A subsequent report summarizes recent findings suggesting a role of Notch in regulating alloreactive T cell immunity. This process mediates recognition of foreign antigens in recipients of organ transplants. The family of Notch receptors consists of four family members (Notch1-4). Some aspects of Notch function in immunity are regulated by single others by multiple receptors. One review of this series describes the specific function of Notch2 during hematopoietic lineage specification and immune function.

The last chapter is dedicated to the oncogenic properties of NOTCH1 in T cell acute lymphoblastic leukemia (T-ALL) and potential avenues of targeting NOTCH1 therapeutically.

Collectively these reviews summarize the pleiotropic functions of Notch in immunity and there is undoubtedly more to come in the future.