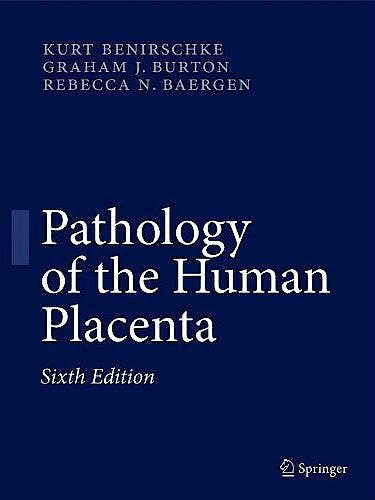 Pathology of the Human Placenta (Hardcover)

Pathology of the Human Placenta remains the most comprehensive and authoritative text in the field. It provides extensive information on the normal placenta, encompassing physiology, metabolism, and endocrinology, and covers placental diseases in great detail. The conditions discussed include shape aberrations, villous alterations and maldevelopment, erythroblastosis fetalis and hydrops fetalis, transplacental hemorrhage, fetal storage disorders, diverse maternal diseases, and infectious diseases. Further chapters are devoted to abortions, molar pregnancies, trophoblastic neoplasms, benign tumors, and multiple pregnancies. Legal considerations are carefully explored, and this new edition also includes a completely new chapter on artificial reproductive technology. In other respects, too, the book has been extensively revised and expanded, with wide-ranging updates that reflect the most recent progress in the field. Some 800 illustrations are included, many of them in color. The detailed index has been further improved and tables updated. Pathology of the Human Placenta will be of enormous value to pathologists and obstetrician-gynecologists alike.

Kurt Benirschke received his MD from the University of Hamburg in 1948 and subsequently moved to the United States, where he trained in pathology at different university hospitals. He held various Harvard Medical School appointments before becoming Professor of Pathology and Chairman of the Department of Pathology at Dartmouth Medical School in Hanover, New Hampshire, where his interests included placental pathology, comparative reproductive pathology, and comparative cytogenetics. In 1970, Dr. Benirschke became Professor of Pathology and Reproductive Medicine at the University of California, San Diego Medical Center. He established a genetics laboratory and ran the autopsy service at the Center, and also chaired the Department of Pathology for 2 years. In addition, he served as Director of Research at San Diego Zoo in a newly established research department. There, he established the first “frozen zoo,” comprising a collection of frozen cells and reproductive material from highly endangered species. Dr. Benirschke was elected a Fellow of the American Academy of Arts and Sciences in 1994. After retiring from the faculty at UCSD he was appointed Professor Emeritus and also served as President of the Zoo's Board of Trustees. His many honors and awards include the ARCS Foundation Scientist of the Year in 1997, the Association of Zoos and Aquariums’ R. Marlin Perkins Award in 1998, and the E.A. Dickson Emeriti Professorship in 2008. Dr. Benirschke has served on a number of journal editorial boards and has authored 544 scientific papers, 111 book chapters, and 31 books.

Graham J. Burton gained a BA in Medical Sciences Tripos at Cambridge University before obtaining a BM BCh degree in Clinical Medicine at Oxford University. In 1982 he was appointed University Lecturer in the Department of Anatomy, and he acquired his MD in 1984. He went on to become Director of Studies in Pre-clinical Medical Studies at St. John’s College, Director of the Sub-department of Veterinary Anatomy, Tutor of St. John’s College, and University Reader in Human Reproduction in the Department of Anatomy. In 2004 he was appointed Professor of Reproductive Biology at the University of Cambridge, and he is currently Deputy Head of the Department of Physiology, Development and Neuroscience and Director of the Centre for Trophoblast Research at the University. Since 2008 Dr. Burton has been European Editor of Placenta and he is also a member of the Editorial Board of the Journal of Anatomy and the Board of Reviewing Editors for Biology of Reproduction. He has been a member of various committees for the International Federation of Placental Associations. Dr. Burton has received several awards, including the 2005 FEDERA Award from the Dutch Federation of Medical Scientific Societies. He was elected an FMedSci in 2011. Dr. Burton has published more than 150 articles in refereed journals as well as many book chapters and two books.

Rebecca Baergen obtained her MD from the University of California, Los Angeles, School of Medicine in 1983 and completed her residency training in pathology at the Los Angeles County Harbor-UCLA Medical Center. Dr. Baergen was a member of the faculty of the University of California at San Diego until transferring to the Weill Medical College of Cornell University in 1997. Dr. Baergen trained with Dr. Kurt Benirschke, one of the pioneers in placental and perinatal pathology and co-author of this book. Dr. Baergen is now Professor of Clinical Pathology and Laboratory Medicine and Chief of Perinatal and Pediatric Pathology at Weill Medical College, as well as Attending Pathologist at NewYork-Presbyterian Hospital. Dr. Baergen has lectured and published extensively in this field and her special interests include the pathogenesis of fetal demise, fetal growth restriction, placental malperfusion, maternal thrombophilias, fetal vascular thrombosis, and abnormalities of the umbilical cord. She has authored approximately 70 publications in peer-reviewed journals.