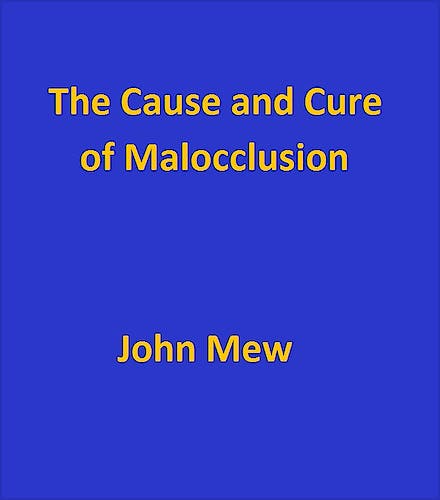 The Cause and Cure of Malocclusion

There is little consensus amongst orthodontists on either the cause or cure of malocclusion. Despite this a relatively uniform type of treatment has developed in many parts of the world, involving the extraction of some teeth, followed by fixed mechanics to align the remainder. This mix has some unfortunate side-effects and a tendency to relapse in the long-term. It has also been severely criticized by world-renowned scientists, such as Lisle Johnston, because it is “At bottom largely an empirical process that is little influenced by theory inferred from any of the life sciences”. In 1981 and 2004 Professor Mew published a new hypothesis for the aetiology of malocclusion suggesting it was primarily due to increased vertical growth precipitated by current life styles and can be cured by correcting oral posture. If this hypothesis is correct, and it has never been seriously challenged on scientific grounds, then it calls in to question the basis on which most orthodox treatment is conducted.

There is clear evidence to show that most current treatment increases vertical growth and that vertical growth damages facial appearance. This is probably the single greatest concern within orthodontics and so far no method has been able to demonstrate an effective long-term solution. To overcome this problem Mew developed Orthotropics® an entirely new concept of treatment using simple appliances to take the maxilla forward and then training the patient to correct their oral posture and muscle tone so that the teeth can align themselves.

Recent scientific research has provided powerful evidence that Orthotropics® is currently the only method that can convert vertical to horizontal growth, obtain long term dental stability and gain the greatest improvement in facial appearance. This provides an interesting opportunity for many paediatric and general dentists who could provide this treatment for 5 to 8 year children.