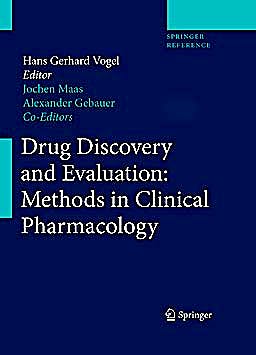 Drug Discovery and Evaluation has become a more and more difficult, expensive and time-consuming process. The effect of a new compound has to be detected by in vitro and in vivo methods of pharmacology. The activity spectrum and the potency compared to existing drugs have to be determined.

As these processes can be divided up stepwise we have designed a book series "Drug Discovery and Evaluation" in the form of a recommendation document. The methods to detect drug targets are described in the first volume of this series "Pharmacological Assays" comprising classical methods as well as new technologies. Before going to man, the most suitable compound has to be selected by pharmacokinetic studies and experiments in toxicology. These preclinical methods are described in the second volume „Safety and Pharmacokinetic Assays". Only then are first studies in human beings allowed. Special rules are established for Phase I studies. Clinical pharmacokinetics are performed in parallel with human studies on tolerability and therapeutic effects. Special studies according to various populations and different therapeutic indications are necessary. These items are covered in the third volume: „Methods in Clinical Pharmacology".

H. Gerhard Vogel is a licenced Pharmacist and Physician (Universities of Erlangen and T?bingen, Germany). He taught as Professor of Pharmacology and Toxicology at the Universities Marburg and Frankfurt. He joined Research at the pharmaceutical company Hoechst AG, Frankfurt, to become Head of Endocrinology, Head of the Department of Pharmacology, and the Head of International Preclinical Evaluation and Development. His latest position was Head of the Decision Board on Pharmaceutical Development. At present, he is working as a Consultant for Pharmaceutical and Medical Research and Development.

Jochen Maas is a biologist and DVM from background (Universities of Heidelberg, Munich and Zurich, Germany and Switzerland). He joined Research at the pharmaceutical company Hoechst AG, Frankfurt, as laboratory head in the area of animal pharmacokinetics. Via a position as section head he became head of the Drug Metabolism and Pharmacokinetics Department in Frankfurt, followed by an identical responsibility in Paris and Europe for the company Aventis. Simultaneously he was responsible for the whole Development area in Germany. His latest positions were Vice President for Research and Development Europe , member of the European Strategic Management Committee and global deputy head of the Metabolism and Pharmacokinetic department of Sanofi Aventis. Simultaneously, he gives lectures in Pharmacokinetics and Drug Delivery Devices at the University of applied science, Giessen-Friedberg.

His scientific work was devoted to the elaboration of new pharmacokinetic models and methods both in the discovery, preclinical and clinical area.

He wrote some chapters of the first edition of Drug Discovery and Evaluation: Pharmacological Assays (Springer-Verlag Berlin Heidelberg New York) in 1997. The second completely revised, updated and enlarged edition with many contributions by his colleagues was published in 2002. The third edition of that work was published in late 2007. He is also Co-editor of the book Drug Discovery and Evaluation: Safety and Pharmacokinetic Assays, which was published at Springer as well.

Alexander Gebauer, MD, PhD, studied medicine at the Medical Faculty of the University Mainz, Germany until 1988 and additionally earned a degree in Computer Science at the CBI, Wiesbaden, Germany. After several years as scientist in the department of Neuropharmacology, University of Mainz, where he completed his thesis on opioid receptors, he joined the pharmaceutical industry.

From 1992 on he held different positions at Aventis (finally head of early development in Frankfurt) and predecessor companies. After the Sanofi-Aventis merger, he was responsible for all cardiovascular development projects at the newly formed company. In 2005 he joined Merz Pharmaceuticals GmbH in Frankfurt, Germany, where he is a member of the managing board and Chief Scientific Officer.