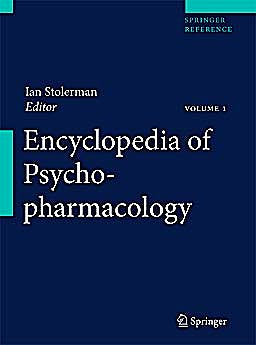 Psychopharmacology is the study of the effects of psychoactive drugs on the functioning of the central nervous system at all levels of analysis, thus embracing cognition, behaviour, psychological states, neurophysiology, neurochemistry, gene expression and molecular biology. It includes, as an integral part of its domain, the interaction of environmental and genetic factors with psychoactive drug action, their medicinal and social uses, and their abuse.

Entries will fall into several main categories: Methods, techniques and target systems (explaining nature of a technique and its uses and limitations) - Drugs and classes of drug (mainly describing effects and mechanisms of action) - Psychiatric states (explaining drugs used to treat them) - Miscellaneous currently interesting topics that do not fall within the above (e.g. cognitive enhancement, regulation and licensing, substance use in religious rituals).

Ian Stolerman received a PhD in Psychopharmacology at University College London in 1969. This was followed by postdoctoral experience at the Albert Einstein College of Medicine (NY) and the University of California, Los Angeles. He then moved to Birmingham and became a member of the MRC Neuropharmacology Unit. In 1980 he relocated to the Institute of Psychiatry, London where he remains as a member of the MRC External Scientific Staff. He heads the Section of Behavioural Pharmacology and is co-chair of the Institute’s addictions interdisciplinary research group.

As part of his efforts to raise the profile of the discipline of behavioural pharmacology, Ian Stolerman was a founder of the European Behavioural Pharmacology Society and became its first chairperson in 1986. Since 1992 he has been Co-Editor of the journal Drug and Alcohol Dependence and he is now vice-President of the International Society of Addiction Journal Editors.

The Drug-discrimination Database, maintained by Professor Stolerman and funded by the US National Institute on Drug Abuse is a unique research tool for both students and research professionals interested in the neurobiological bases of addiction. The drug discrimination method is widely recognised as an invaluable method for studying the behavioural and neuropharmacological effects of psychoactive drugs and plays an important role in developing pharmacotherapies useful in treating psychiatric disorders and addiction.