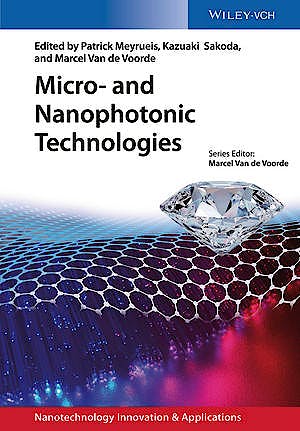 Edited and authored by leading experts from top institutions in Europe, the US and Asia, this comprehensive overview of micro- and nanophotonics covers the physical and chemical fundamentals, while clearly focusing on the technologies and applications in industrial R&D.

As such, the book reports on the four main areas of telecommunications and display technologies; light conversion and energy generation; light-based fabrication of materials; and micro- and nanophotonic devices in metrology and control.

Foreword
Overview of the Science and Technology in the Field of Nanophotonics: History, Highlights, Future Prospects/Outlook

PART I. From Research to Application

Patrick Meyrueis is Emeritus Professor of Physics at the University of Strasbourg, France. He started his career as an engineer of the French Department of Industry and took up a position as Associate Professor at the University Louis Pasteur (nowUniversity of Strasbourg) in 1981 where he founded the Photonics Group, which he headed until 1987. He then moved on to become founder and head of the Photonics System Laboratory which was one of the most advanced labs in the field of planardigital optics (now Icube Institute). Patrick Meyrueis is the author of more than 200 publications, 100 patents and several books. He was the chairman of more than 20 international conferences in photonics.

Kazuaki Sakoda is Professor in the Graduate School of Pure and Applied Sciences at Tsukuba University, Japan, and Managing Researcher of the Research Center for Functional Materials at the National Institute of Materials Science (NIMS). After his BE and ME degrees, obtained from Tokyo University, he worked as Senior Researcher at TORAY Industries, Inc. for eleven years. Kazuaki Sakoda received his PhD in Applied Physics from Tokyo University in 1992 and continued his academic career as Associate Professor in the Research Institute for Electronic Science at Hokkaido University before taking up his current positions.

Marcel Van de Voorde has 40 years' experience in European Research Organisations including CERN-Geneva, European Commission, with 10 years at the Max Planck Institute in Stuttgart, Germany. For many years, he was involved in research and research strategies, policy and management, especially in European research institutions. He holds a Professorship at the University of Technology in Delft, the Netherland, as well as multiple visiting professorships in Europe and worldwide. He holds a doctor honoris causa and various honorary Professorships.
He is senator of the European Academy for Sciences and Arts, in Salzburg and Fellow of the World Academy for Sciences. He is a Fellow of various scientific societies and has been decorated by the Belgian King. He has authored of multiple scientific and technical publications and co-edited multiple books in the field of nanoscience and nanotechnology.