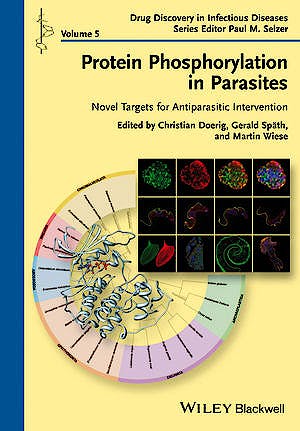 This is the first book to collect and summarize in one publication the efforts to use kinases or phosphatases for drug development against parasite infections.

The editors and contributors comprise the Who?s Who in the field, and they are comprehensive in covering every aspect of the topic, from basic research findings to translational approaches in drug development.

The result will be welcomed by everyone in academia and industry participating in the global effort to finally combat the major diseases caused by eukaryotic parasites. This is volume one of a two-volume treatise, the second being exclusively dedicated to efforts to combat malaria using the same approach.

Christian Doerig obtained his PhD in molecular virology at the Swiss Institute for Experimental Cancer Research (ISREC) in Lausanne (Switzerland), After a post-doc on herpes simplex virus in the USA, he turned his attention to malaria and pioneered the study of protein phosphorylation in Plasmodium. He was ?Directeur de Recherches? at the French biomedical research agency, Inserm (Institut National de la Sante et de la Recherche Medicale), for about 15 years, establishing the first Inserm units in the UK (Wellcome Trust Centre for Molecular Parasitology, University of Glasgow) and subsequently in Switzerland (Inserm-EPFL joint laboratory, Ecole Polytechnique Federale de Lausanne (EPFL). He will join Monash University (Melbourne) as head of the Deprtment of Microbiology in 2012.
The research programme of Inserm-EPFL joint laboratory is aimed at identifying and characterising P. falciparum genes involved in the control of cell proliferation and development, concentrating on kinomics. The laboratory has brought major contributions to the field of signal transduction, cell cycle control, and kinome characterisation in malaria parasites.

Gerald Spaeth DR. Gerald Spath studied Genetics, Microbiology, and Immunology at the Johannes Gutenberg University, Mainz, Germany, and carried out his PhD thesis under the direction of Prof. Mary Weiss at the Institut Pasteur on the role of the liver-specific transcription factor HNF4 in hepatic differentiation. After receiving his PhD from the University of Paris 7 in 1993, he joined Prof. Steve Beverley's laboratory at Washington University Medical School in Saint Louis, USA, where he dissociated the virulence functions of the Leishmania surface glycolipid LPG using genetic approaches. Dr. Spath obtained his first faculty appointment in 2001 at the NYU Medical School, New York, USA, where he initiated an independent research program on the immune recognition of LPG. In 2004, Dr. Spath created his research unit at the Institut Pasteur in Paris, France. His unit uses phospho-proteomics approaches to reveal Leishmania-specific signaling pathways underlying parasite pathogenicity, with the aim to target parasite protein kinases for anti-microbial intervention. Dr. Spath is currently Associate Professor at the Institut Pasteur, and Scientific Director of the FP7 LEISHDRUG consortium.

Martin Wiese studied Biology, Microbiology, Biochemistry and Parasitology at the Universities of Karlsruhe and Tuebingen, Germany. He obtained his PhD from the University of Tuebingen for his studies on Leishmania secreted acid phosphatase performed at the Max-Planck Institute for Biology, Tuebingen, Germany. Still at the Max-Planck-Institute for Biology, Tuebingen, he started his research into mitogen-activated protein (MAP) kinases of Leishmania and established them as suitable drug targets against Leishmaniasis. In 2001 he became an independent group leader at the Bernhard Nocht Institute for Tropical Medicine, Hamburg, Germany. Since 2007 he is a John Anderson Research Senior Lecturer at the University of Strathclyde.

Prof. Dr. Paul M. Selzer studied Biology, Parasitology, and Biochemistry at the University of Tubingen, Germany, where he also received his PhD in Biochemistry on subjects related to the protozoan parasite Trypanosoma brucei. As a post-doctoral fellow he spent three years in the parasitology and tropical disease laboratory of Prof. James H. McKerrow at the University of California, San Francisco (UCSF). Within the Molecular Design Institute at UCSF Dr. Selzer was introduced to modern drug discovery approaches and technologies. He broadened his scientific and business knowledge as a researcher within diverse pharmaceutical companies including Boehringer Mannheim GmbH, Germany, SmithKline Beecham p.l.c., UK, Hoechst Roussel Vet GmbH, Germany, and finally Intervet Innovation GmbH, Germany, a part of the Animal Health company SP-Intervet a 100% member of MSD. Dr. Selzer is also a teacher in Biochemistry, Bioinformatics, and Chemoinformatics at the University of Tubingen in the Department of Biochemistry, which awarded him the title of Professor for his achievements in teaching and research. In 2008, he was also awarded an Honorary Professorship in the Department of Infection and Immunity at the University of Glasgow.