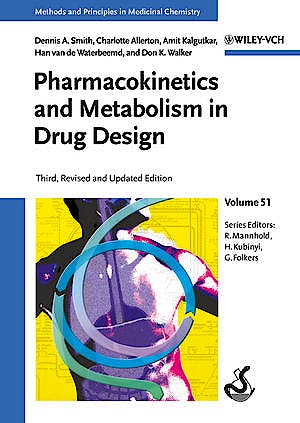 Pharmacokinetics and Metabolism in Drug Design

In this new edition of a bestseller, all the contents have been brought up-to-date by addressing current standards and best practices in the assessment and prediction of ADMET properties. Although the previous chapter layout has been retained, substantial revisions have been made, with new topics such as pro-drugs, active metabolites and transporters covered in detail in a manner useful to the Drug Discovery scientist. The authors discuss the parameters and processes important for the absorption, distribution and retention of drug compounds in the body, plus the potential problems created by their transformation into toxic byproducts.

While aimed at all those dealing professionally with the development and application of pharmaceutical substances, the readily comprehensible style makes this book equally suitable for students of pharmacy and related subjects.

New to This Edition

Dennis Smith has worked in the pharmaceutical industry for more than 30 years since gaining his Ph.D. from the University of Manchester (UK). Working at Pfizer Global R&D at Sandwich for the past 20 years, he was named Vice President for Pharmacokinetics, Dynamics and Metabolism. His research interests and publications span all aspects of drug discovery and development, particularly where drug metabolism impacts on the design of more efficacious and safer drugs.

Charlotte Allerton is the Pharmacokinetics, Dynamics and Metabolism Site Lead for Pfizer, Sandwich, UK. Charlotte obtained her first degree at the University of Nottingham, and a MPhil from the University of Cambridge Chemistry Department. Charlotte initially spent 14 years in Medicinal Chemistry at Pfizer in Sandwich working across a range of disease areas, before joining the Pharmacokinetics, Dynamics and Metabolism (PDM) department in 2007 as the Genitourinary Therapeutic Area Lead. In 2008 Charlotte became the PDM Sandwich Site Lead, covering a portfolio of anti-viral, allergy and respiratory, pain and internal medicine drug discovery programmes.

Amit Kalgutkar received his academic degrees from the University of Bombay (India) and from Virginia Polytechnic Institute (USA). Joining Pfizer in 1999, he is currently a Research Fellow in the Pharmacokinetics, Dynamics and Metabolism Department at Pfizer (Groton Laboratories). He is also an adjunct faculty member in the Department of Biomedical and Pharmaceutical Sciences, University of Rhode Island.

Han van de Waterbeemd studied Chemistry at the Technival University of Eindhoven and did a Ph.D. in Medicinal Chemistry at the University of Leiden, The Netherlands. In his pharmaceutical career he worked for Roche, Pfizer and Astra-Zeneca. His research interests include the role of molecular properties in drug disposition and modeling of ADMET properties.

Don Walker has a degree in Biochemistry from the University of London (UK). He joined the Drug Metabolism Department at Pfizer in Sandwich in 1986 and since then has contributed to the drug metabolism and pharmacokinetic evaluations on several drug discovery and development projects.