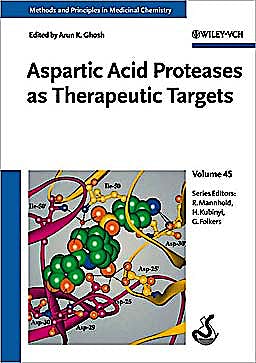 In this ground-breaking practical reference, the family of aspartic acid proteases is described from a drug developer's perspective. The first part provides a general introduction to the family of aspartic acid proteases, their physiological functions, molecular structure and inhibition. Parts two to five present various case studies of successful protease inhibitor drug design and development, as well as current and potential uses of such inhibitors in pharmaceutical medicine, covering the major therapeutic targets HIV-1 protease, renin, beta-secretase, gamma-secretase,plasmepsins and fungal proteases.

A ready reference aimed primarily at professionals in the pharmaceutical industry, as well as for anyone studying proteases and their function.

RENIN FOR TREATMENT OF HYPERTENSION
Discovery and Development of Aliskiren, the First-in-Class Direct Renin Inhibitor for the Treatment of Hypertension
Evolution of Diverse Classes of Renin Inhibitors Through the Years

Arun K. Ghosh studied chemistry at the University of Calcutta and the Indian Institute of Technology, Kanpur. He obtained his Ph.D. at the University of Pittsburgh and pursued post-doctoral research at Harvard University. He was a research fellow at Merck Research Laboratories prior to joining the University of Illinois, Chicago as an assistant Professor in 1994. In 2005, he moved to Purdue University where he is currently the Ian P. Rothwell Distinguished Professor of Chemistry and Medicinal Chemistry. His notable honors include, Arthur C. Cope Scholar Award, Robert Scarborough Medicinal Chemistry Award, American Association for the Advancement of Science, University of Illinois University Scholar, National Merit Scholar of India. He has published over 200 research papers and holds numerous patents. Professor Ghosh's research interests include diverse areas of organic, bioorganic and medicinal chemistry with particular emphasis on organic synthesis and protein-structure-based design of biomolecules.