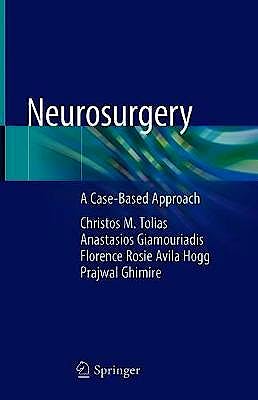 This book describes neurosurgical cases following the format of the clinical handover. Each case has a one line summary and differential diagnosis, appropriate interpretation of illustrated radiological studies, further ancillary tests, and management options. When appropriate, scoring/scaling systems and detailed anatomy are described, as well as basic surgical techniques and approaches. The information provided is evidence-based, referring to the relevant publications.

Neurosurgery: A Case-Based Approach is aimed at junior neurosurgical trainees, both when studying for their exams and enhancing their ability to handover to colleagues.

Christos Tolias MBBS, PhD, FRCS (Engl), FRCS (SN) gained his medical degree from Athens National University, Greece in 1989. He became a Fellow of the Royal College of Surgeons of England in 1994, and completed his PhD on "Extracellular Superoxide and Nitric Oxide: A real-time investigation in the role of free radicals in brain cell physiology and pathophysiology in vitro" in 2000 at the University of Warwick, UK. He is currently Consultant Neurosurgeon & Honorary Senior Lecturer at King`s College Hospital NHS Foundation Trust with a major interest in vascular neurosurgery . He is also lead Clinician in Neurosurgery, SBNS Council Member, Examiner in the Intercollegiate Specialty Examination in Neurosurgery and Director of the first nationally accredited UK Senior Neurovascular Fellowship.

Anastasios Giamouriadis MD FRCS En (SN) was born in Greece in 1980. In 2005, he gained his medical degree from the Aristoteles University, Thessaloniki, Greece, and his Certificate of the Army Medicine Academy, Greece. He continued his neurosurgical training in the Hellenic Army until 2010, when he moved to the UK to pursue JCF/SHO, SpR and Clinical fellow roles at King's College Hospital Neurosurgical Department, London, UK. He has also done fellowships at St George's hospital, London and Weill Cornell Brain and Spine Center, NY, US. He is currently a Senior Clinical Fellow in Skull Base & Pituitary Surgery at King's College Hospital, London, UK and he completed last year in the same Unit the Fellowship in Neuro Oncology.

Florence Rosie Avila Hogg BSc MB ChB MRCS gained her medical degree from the University of Bristol in 2009 which involved an intercalated BSc in Neuroscience. She completed the South London Academic Foundation program and is now a Neurosurgery Specialist Trainee in London, UK. She is currently completing a PhD at St Georges University of London with a focus on spinal cord injury and cell based regenerative therapies. She was awarded the Joint Royal College of Surgeons / UK Stem Cell Foundation Research Fellowship in May 2018.

Mr. Prajwal Ghimire MBBS MRCSEd MSc is a medical graduate of Kathmandu University affiliated Manipal College of Medical Sciences, Pokhara, Nepal of 2011 batch gaining honours of Vice Chancellor Gold Medal for best performing student of the university. He completed his MRCS from Royal College of Surgeons of Edinburgh in 2014. He has worked as a house officer in neurosurgery, internal medicine, Accident and emergency, general surgery and critical care whilst in Nepal before he moved to the UK in 2015 to purse his career in Neurosurgery. He completed his master's degree in clinical Neuroscience (MSc) with Distinction in 2016 from King's College London, UK. He has worked as Junior Clinical Fellow in Neurosurgery at University Hospital Coventry and Warwickshire NHS Trust, Coventry in 2016 and then progressed in his career to Clinical Fellow and specialist registrar SpR in Neurosurgery at King's College Hospital NHS Foundation Trust, London since October, 2016. He has multiple peer reviewed articles published in national and international journals and has presented oral and poster papers in national and international conferences both in Nepal and the UK. He is a current member of SBNS, EANS, GMC, BMA, NMA and NMC.