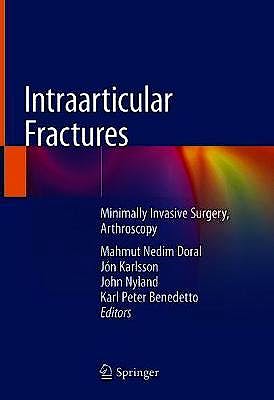 This superbly illustrated book is a comprehensive and detailed guide to the contemporary arthroscopic management of intraarticular fractures. The opening section addresses a variety of basic aspects and key issues, including the difficulties posed by intraarticular fractures, principles of fixation, cartilage healing, and rehabilitation. The minimally invasive surgical techniques appropriate to individual types of fracture are then fully described and depicted, covering fractures of the shoulder and elbow, wrist, pelvis and hip, knee, and ankle. Guidance is also provided on avoidance and management of complications and rehabilitation. The closing section addresses relevant miscellaneous issues, including arthroscopic management of temporomandibular joint fractures and extended indications for endoscopy-assisted fracture fixation. This volume will be of value for both trainee and experienced surgeons when treating patients with these complex fractures.

Mahmut Nedim Doral, MD, is Professor and Chairman of the Department of Orthopaedics and Traumatology at UFUK University, Dr. Ridvan Ege Hospital, Ankara, Turkey. He took up this position in 2011, having previously been Chairman of the Department of Sports Medicine at the University of Hacettepe, School of Medicine. He was the medical chief of staff of Galatasaray Sportive Club U20 from 2012 to 2014 and director of Hacettepe University Sports Medicine Center from 1995 to 2017. Professor Doral has held a variety of leadership positions with ISAKOS and ESSKA. He is a Past President of the European Federation of Orthopaedic Sports Traumatology (EFOST), the Asia-Pacific Knee Society, the Turkish Society of Sports Traumatology, Arthroscopy, and Knee Surgery (TUSYAD), and the Turkish Society of Orthopaedics & Traumatology and currently serves on the Executive Council of the Turkish National Olympic Committee. He is also the founder and current President of the Turkish Society of Sports Traumatology and current elected President of the Asia Pacific Orthopaedic Association. He was honored with distinguished visiting professor posts at the University of Pittsburgh School of Engineering in 2006 and Kentucky University in 2009. He has authored more than 150 scientific articles in peer-reviewed journals and his last book, Sports Injuries: Prevention, Diagnosis, Treatment and Rehabilitation, was published by Springer in 2012, with a second edition in 2015 (in four volumes).

Jon Karlsson, MD, PhD, has been Academic Head at the Orthopaedic Department, Sahlgrenska Academy, University of Gothenburg, Sweden, since 2001. Dr. Karlsson graduated from the medical school in Reykjavik, Iceland, in 1978. He defended his PhD thesis at Gothenburg University in 1989 and was appointed Associate Professor in 1990. In 1991 he became a Senior Consultant in the Orthopaedic Department of Sahlgrenska University Hospital, serving as Clinical Head from 1997 to 2001. He was appointed Professor of Orthopaedics and Sports Traumatology in 1998. Dr. Karlsson served as President of the Swedish Association of Sports Medicine, 1999-2001. Since 2008 he has been Editor-in-Chief of KSSTA (Knee Surgery Sports Traumatology Arthroscopy), the official journal of ESSKA. He was program chairman of the biannual ESSKA congress in 2006, 2008, and 2010. Dr. Karlsson has been a member of the ISAKOS Board since 2005 and is currently secretary of the ISAKOS Executive Board of Directors. He is the author of more than 300 peer-reviewed papers and 26 books in Orthopaedics and Sports Traumatology, as well as several book chapters.

Dr. John A. Nyland is a sports certified physical therapist, athletic trainer and strength and conditioning specialist. He is a member of ESSKA, the Sports and Orthopaedic Sections of the American Physical Therapy Association, the National Athletic Trainers' Association, the American College of Sports Medicine, and the National Strength and Conditioning Association. He currently serves as Professor and Program Director for the Master of Science in Athletic Training Program at Spalding University in Louisville, Kentucky, USA. He is an International Editorial Review Board member for Knee Surgery Sports Traumatology Arthroscopy, the Journal of Orthopaedic and Sports Physical Therapy (JOSPT), Arthroscopy: The Journal of Arthroscopic and Related Surgery, the Journal of Athletic Training, the Turkish Journal of Physiotherapy and Rehabilitation, and Case Reports in Orthopedics. Dr. Nyland is President of the JOSPT - Movement Science Media Board of Directors and serves as a rehabilitation consultant with the International Grande Hospital in Kathmandu, Nepal. He is a past recipient of the Excellence in Education Award from the Sports Section of the American Physical Therapy Association and the John Joyce Award from the International Society of Arthroscopy, Knee Surgery, and Orthopaedic Sports Medicine. He has authored or co-authored 180 peer reviewed papers and 35 book chapters, developed the books "Clinical Decisions in Therapeutic Exercise: Planning and Implementation" and "Innovations in Knee Rehabilitation" and authored a home study course entitled "Therapeutic Strategies for Developing Neuromuscular Control in the Kinetic Chain". Nyland served on the 1996 and 2008 USA Paralympic games sports medicine staff as an athletic trainer and physical therapist, and as an International Para-Archery Classifier in 2012 and 2016.

Karl Peter Benedetto, MD, PhD, was Chief of Trauma at Landeskrankenhaus (State Hospital) Feldkirch in Austria from 2000 until 2016, when he retired to work in private practice in Innsbruck. Prior to moving to Feldkirch, he was first Vice Chairman (1988-1998) and then Interim Chairman of the Trauma University Innsbruck. He was appointed a Professor at the University of Innsbruck in 1990. Dr. Benedetto has served as President of the Austrian Society of Sports Medicine (2011-2015), President of the German-speaking Arthoscopy Association (1994-1996), President of ESSKA (2002-2004), and President of the Austrian Society for Trauma Surgery (2008-2010). He was President of the Magellan Society from 2004 to 2006. He has been a board member and also a corresponding and honorary member of multiple national and international societies. Dr. Benedetto has published 92 articles in peer-reviewed journals and written numerous book chapters. He has served as team doctor for various soccer teams, volleyball teams, and the Austrian ski team.